Keeps a Low Profile
Known to be a doting father, Andy once revealed that he fetches his little princess to and from school personally. As hands-on parents, the couple personally chose their daughter’s school and attended to details of her enrolment. With Hanna now 11, Andy was recently spotted by a netizen turning up for her daughter’s performance. Despite being dressed in simple black attire while seated along with other parents in the school’s assembly hall, Andy’s celebrity aura was hard to miss! 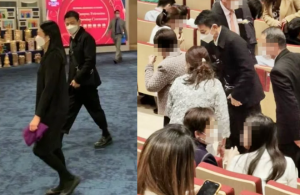 Sharing a photo of bumping into Andy Lau at the hall, the said netizen enthused, “Andy Lau watching her daughter’s school performance. This celebrity dad is very responsible, he fetches her daughter to school and takes part in her (school) activities, a model for dads to learn from!”