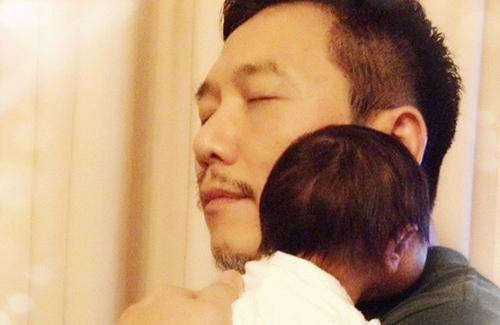 Since marrying Mainland actress Zhao Ting (趙庭) in 2013, Deric Wan (溫兆倫) led a low-profile marriage. Last night, Deric uploaded a photograph of his newborn daughter, an announcement that took the media and fans by surprise.

Although only the back of Deric’s daughter was visible, the photo showed him holding his little one in a loving manner. Deric also included the caption, “To my dear daughter – I hope that you will always be blessed and happy.”

Although the couple has been married for two years, there were no indications that they would be having a child anytime soon. The media also failed to catch Zhao Ting’s pregnancy, thus this news certainly caused a ripple of surprise among fans. After Deric’s sudden announcement, many wondered if Deric was actually a father after all. While some were skeptical, many colleagues and friends posted congratulatory messages and well wishes on Deric’s blog.