Hong Kong actor Dominic Ho (何浩文) has had two known girlfriends since his debut in 2009. His most profile relationship was with actress-singer Kandy Wong (糖妹), but that ended in 2013. In 2016, Dominic admitted to a new relationship with flight attendant Candy, which lasted two years; Dominic announced their split in March 2018.

Single again, Dominic is ready to start a new relationship. According to the latest rumor mill, Dominic has been pursuing rookie model Natalie Fong (方敏婷), his label mate. Natalie and Kandy actually share a physical resemblance. 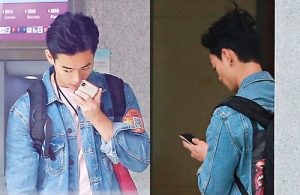 The paparazzi caught up with Dominic a past few days, and noticed that the 29-year-old has been very attached to his phone. During his smoking breaks, Dominic would pull out his phone, scroll through social media, and leave behind voice messages. It’s been suggested that Dominic could have been communicating with his new girlfriend.

After finishing lunch at the canteen, he stopped by a bakery and purchased two loaves of bread. His phone never left his hand. During the breaks in between filming, Dominic would go to a corner and continue to text.