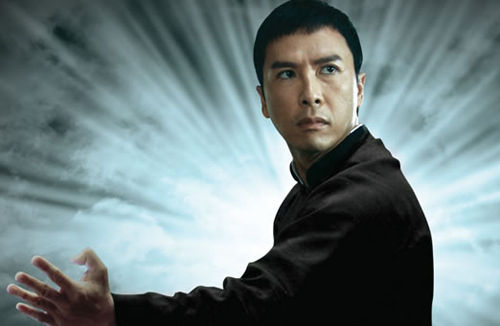 The couple enjoyed the sights of the Big Apple and even toured the Empire State Building! When the security guards realized that martial arts superstar, Donnie Yen and his wife, were present, they were immediately ushered past the crowd. Donnie and Cissy were asked to take photographs, which were displayed on the wall of VIP guests who had toured the Empire State Building.

When asked who was his favorite onscreen fighting partner, Donnie laughed, “Onscreen? Thank God, you did not ask about offscreen! My favorite fighting partner is Jet Li. I am very fortunate that we did two movies, Once Upon a China II <黃飛鴻二之男兒當自強> and Hero <英雄>, together. Hopefully, I can work with him again!”

Donnie Yen’s Ip Man <葉問> film franchise was one of the most successful martial arts films in recent years. In April, it was revealed that Ip Man 3 in 3D was currently in pre-production. At the New York Asian Film Festival, Donnie noted that Director Wilson Yip (叶伟信) was currently working on conception for Ip Man 3.

Donnie did not reveal too many details about Ip Man 3, but mentioned it will film next year. Both Donnie and Wilson hoped to bring new material and content to the third installment, with 3D effects to elevate the thrill of the fights!

Interestingly, Donnie Yen was first approached to portray the role of Ip Man in 1997. Stephen Chow (周星馳) was cast as Bruce Lee. However, the project never materialized. Director Wong Kar Wai (王家衛) then announced that he will film The Grandmasters < 一代宗師>, a biopic about Ip Man. After Donnie committed to portraying “Wai Si Lei,” he was later approached to star in Ip Man by producer Raymond Wong (黃百鳴) instead.

Ip Man 3 was rumored to feature the story of the martial arts master’s most famous disciple, Bruce Lee. Asked whether Donnie saw Bruce Lee as a role model, he answered, “Yes, Bruce Lee played an inspiring role in my life. He still does.”

Despite Donnie’s successful period martial arts films, he preferred acting in contemporary action films instead. While discussing the filming of The Lost Bladesman, he joked about swinging his sword and the hassle of keeping an eye on his long beard. Donnie said, “In the near future, I want to focus on more contemporary films, which has less restrictions. There is a lot of burden in playing General Kwan [in The Lost Bladesman]. As an actor, I want more freedom and prefer a contemporary set story.”

Donnie joked, “I just finished a romantic film. There was no action; no need to sweat!” He said earnestly, “I am very fortunate, to be given many opportunities after Ip Man. I am able to explore different types of films, comedies and romantic films. I will not forget my roots. I wish to elevate what I do best, which is action films!”

Jayne: It reached 100 degrees in New York City over the weekend. Had I known about Donnie’s special guest appearance at the New York Asian Film Festival, I would have rushed out in the heat to see him! It’s still good to know that he was at the Empire State Building today, a site I often walk by!