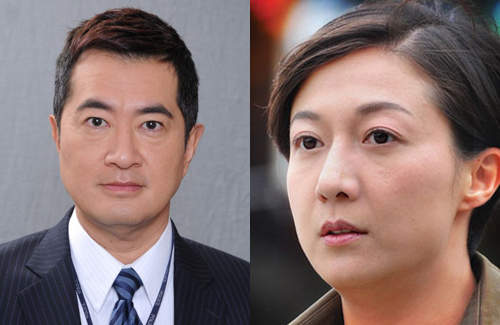 Highs and Lows <雷霆掃毒> costars, Elaine Ng (吳綺莉) and Patrick Dunn (鄧梓峰), are the next victims to a series of car-shaking rumors that is coming under fire in Hong Kong.

The rumor first began circulating around forums of a disciplinary force’s website a few days ago. The rumor was of “a man and a woman from the narcotics team of a certain ‘three-colored’ television station were discovered inside a mini-van in Pat Heung, Yuen Long… a flashlight was shot at them… they pleaded the cops to not tell anyone.”

Two nights ago, the rumor was passed on to other popular websites and forums, and it became a popular topic among netizens. Some netizens “revealed” that the man and woman were in fact actors Patrick Dunn and Elaine Ng from the Highs and Lows cast, and a new rumor claimed that Elaine Ng was arrested by the police for questioning last night.

Elaine Ng Was Not Arrested

The following day, the press caught Elaine Ng arriving at TVB Studios for her hosting program. Elaine did not appear shocked at the sudden swarm of reporters, and said, “I know what you are here for. It’s about the rumors where the cops found me and Patrick Dunn in a car, right? I don’t know how these rumors started! They are quite funny. I am not close with Patrick. I don’t even know where Pat Heung is! I am being tricked and ridiculed!”

Asked if Elaine had discussed with the issue with Patrick, Elaine said, “It’s not necessary. We are not close. I don’t have his phone number, and I would have to contact the producer to reach him. This would only get more people involved. Besides, I have heard from a colleague that he is not in Hong Kong.”

Elaine also said, “On the night where the rumor said I was arrested by the police, I was jogging in Sha Tin. Afterwards, I went back to my apartment in Tai Po. I didn’t know about the rumor until my neighbor knocked on my door and asked if I was arrested. I did not expect the rumor to have spread so far. Many radio stations, newspapers, and magazines had all contacted me to respond to the incident. The police also never contacted me. If I was arrested, how would I be able to take phone interviews? I am not angry, but I do feel bad for getting the media involved. Sorry!”

Patrick is currently filming Triumph in the Skies 2 <衝上雲霄Ⅱ> in Great Britain. Patrick received a long-distance phone interview with the Hong Kong press. The actor cried, “I am furious! It is absolutely fake. I am not familiar with Elaine. Since day one, Elaine and I only interacted with each other at work. We do chat, but we only chat about work. We both have kids. We both have a family. This rumor is disgusting. If you have evidence, bring it out! In police investigations, they will always mark down the license plate number and time. Did they? Obviously, this rumor is not true!”

How did Patrick’s wife feel about the rumor? Patrick said, “She understands me very well. She trusts me.” Asked if Patrick was worried about the rumor tarnishing his image, Patrick said, “The online world is always just about gossip. I am not worried. My image is backed by many years of experience. I am really furious about this. This rumor makes me even angrier than the time when I was rumored to be the cause of Deric Wan (溫兆倫) and Sonija Kwok’s (郭羨妮) split!”

Patrick also released a statement through his Weibo, threatening to pursue legal action against the person who initiated the car-shaking rumors, and stressed none of the details in the rumors were true.

TVB executive, Virginia Lok (樂易玲), expressed, “I don’t believe in the rumor because this could not happen. Both parties have their own families.”