Eliza Sam is Ready For Every Moment 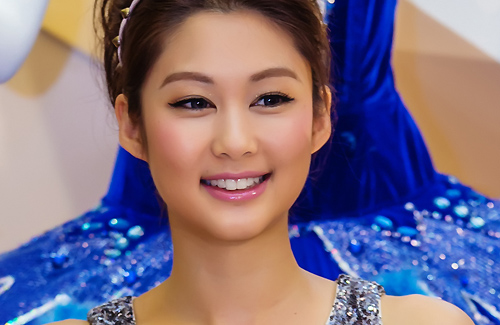 In just two months, Eliza Sam (岑麗香) has leaped from being a nameless Miss Chinese International winner to one of TVB’s most popular young actresses. A cheerful smile, a friendly nod, and a voluptuous body did the trick.

After starring in last year’s Divas in Distress <巴不得媽媽…>, and taking another spin as Choi Sum’s mother in Inbound Troubles <老表，你好嘢>, the 28-year-old Canadian-born actress has successfully caught the attention of the critical Hong Kong audience. With three drama projects currently at hand and more slated to come, Eliza will be going full turbo in her acting career. Eliza’s future at TVB is bright and promising.

Eliza, with ancestral roots from Guangdong, was born in Vancouver, Canada in November 1984. Eliza graduated with a Bachelor degree in fashion design and marketing management, and a diploma in human resources. After winning in the Miss Chinese Vancouver Pageant in 2009, Eliza went on to win the 2010 Miss Chinese International Pageant in Hong Kong, which opened doors to join TVB.

With such an educated background, Eliza did not think it was a waste for her to join the entertainment industry. “I’ve learned fashion, so now I can change up my own dresses. Human resources and marketing are areas that can teach me how to handle different situations and problem solving. The things I’ve learned in university can be attributed to my current work and life.”

Asked if she is used to her current life in the Hong Kong entertainment industry, Eliza admitted that she is still in the process of getting used to Hong Kong’s quick and ever-changing lifestyle. “I am still learning to adapt. I often remind myself to keep an open mind and be willing to learn more, because the entertainment industry is always changing. However, I am still not used to Hong Kong’s lifestyle, including the language and the culture. Life in Hong Kong is too tense and much more fast-paced than where I used to live. What I do like about it is that it always stays fresh. Immigrating to Hong Kong has been my biggest challenge. I encounter new things every day. I have to be ready for every moment, even when I know I am not yet ready.”

Eliza’s portrayal as “Hannah” in Divas in Distress garnered three nominations at the 2012 TVB Anniversary Awards – Best Supporting Actress, Favorite Female Character, and Most Improved Actress. Defeated by her colleagues in all three categories, Eliza expressed that she was not disappointed in losing.

“Not even a tiny bit,” Eliza said cheerfully. “I am still a rookie. My acting still needs much improvement. Having the chance to be nominated in one award left me very satisfied, let alone three! After all, my Cantonese is still not fluent enough, and I can only rely on watching TVB dramas to learn and find more inspiration. At the award ceremony, those who sat next to me were all professional television drama actors. They are artists I respect, and when I see them win, it pushes myself to continue to seek improvement.”

Currently filming for TVB action drama, Sniper Attack 2013 <神槍狙擊2013>, Eliza has to undergo vigorous training regimes for her role, an only female member of the Special Duties Unit. Was Eliza physically prepared to take on the role?

“If it wasn’t for this role, I would not have discovered that I was able to do different things. I am able to handle the physical aspects of the role. Of course, what we do on film is nothing compared to the real SDU members, but I could still grasp how it felt like to be one to a certain degree.”

32 comments to Eliza Sam is Ready For Every Moment