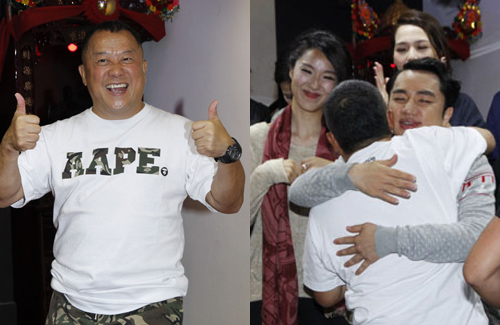 Over the past six months, Wong Cho Lam (王祖藍) has been waiting for the opportunity to give Leanne Li (李亞男) a memorable marriage proposal. Since Cho Lam wanted friends to be present to witness their joy together, Eric Tsang (曾志偉) suggested that the 48th TVB Anniversary Gala was the perfect occasion to ask Leanne to marry him.

After Cho Lam received approval from Leanne’s parents for the couple’s marriage union, he considered different ways to propose to Leanne. Originally Cho Lam planned to propose at a Macau hotel ball room, after Eric’s Super Trio <掌門人福祿壽老表騷> performance so their group of close friends can also be included. Eric hinted that the couple may hold their wedding celebration on Valentine’s Day, so it was more speedy to propose at the TVB Anniversary instead.

“Will it work?” Cho Lam initially questioned. Eric responded, “If you want Leanne to be happy and share the occasion with lots of friends, then the TVB Anniversary is the perfect time!”

Eric stayed up an entire night to plan the logistics for the proposal, making sure that Leanne will be surprised and overjoyed. Eric said that Leanne’s parents from Canada must be present to add authenticity to the proposal.

At 6 p.m. on the night of the Anniversary Gala, Cho Lam called close friends to let them know about the upcoming proposal, but asked them to keep it a secret from Leanne. When Cho Lam performed during the magic segment, he intentionally pretended to be hurt by the contraption, first giving Leanne a jolt of fear before kneeling down to ask her to marry him.

“I was completely scared [by the possibility that Cho Lam might be hurt]!” Leanne said.

Although viewers were moved by the sincerity of Cho Lam’s gesture, some felt that the proposal overshadowed the TVB Anniversary Gala. Eric responded, “It’s great that it became a hot topic. Liza Wang (汪明荃) and Carol Cheng (鄭裕玲) cried afterward, and the entire studio became a floodgate [of tears]. The best part in doing a show is to give audiences the most realistic side. The proposal was very moving and benefits the city. Hong Kong needs more joyous occasions for added auspiciousness.”