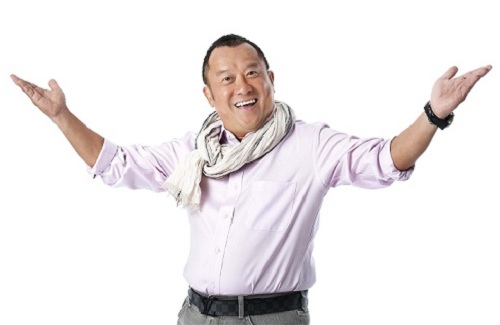 The rape of a 23-year-old TVB actress and the exposure of 35 male actors and policemen posing partially or fully nude for wealthy businessman, Lau Ding Sing (劉定成), were two ugly scandals that marred the Hong Kong entertainment industry in recent days. As the Chairman of the Hong Kong Performing Artists Guild, Eric Tsang (曾志伟) was asked to comment on the scandals, in which he advised artists to “Just say no!” when thrust with temptation.

The identity of the 23-year-old TVB actress remained known only among a few key TVB executives. The victim of the rape crime did not approach the Hong Kong Performing Artists Guild, thus Eric Tsang said helplessly that the association did not know how to assist the victim. Eric felt that the rape incident was magnified because it involved celebrities, but it was a pressing situation that young people–especially women–should reflect upon. Since the internet made it increasingly easy for people of different backgrounds to meet, Eric urged caution that the meetings be conducted with personal safety in mind.

The court case of 62-year-old gay businessman, Lau Ding Sing, in which he was being sued for indecent assault and intimidation of 3 male actors and 1 fitness actor, has caused a public uproar. Due to the current court hearing of the case, it was revealed that Mr. Lau possessed 100,000 partially nude or fully nude photos. Mr. Lau said that Him Law (羅仲謙) and William Chan (陳偉霆) had willingly modeled for him years ago, stating that the involved men were all greedy for money!

Asked what advice Eric Tsang wished to offer to raise the alertness level of male actors faced with such compromising situations, he said, “First, do not be curious. Second, do not be tempted. The greatest weakness in life is not knowing how to ‘say no’! ” Asked whether he was lured in the past, Eric said, “With a face like this, such incidents would not involve me! I had to rely on myself since I was young!”

Eric has been following the nude photo case closely, remarking that the photos may implicate more men outside of the entertainment industry. Due to their curiosity and eagerness for fame and fortune, young people were especially easily lured to pose in suggestive photos, without being clear on what they may be setting themselves up for.

Rumored to have posed for photos for Lau Ding Sing in the past, TVB actor, Stanley Cheung (张景淳) from When Heaven Burns <天與地> said, “He did seek me out through an intermediate party. I did go to his house, but immediately left when I felt that the situation was not right. Afterward, I assisted the police with their investigation. Since the case has now entered the judicial phase, it is not convenient to comment further.”
Source: Sohu.com

Jayne: Saying no is a lot easier said then done, especially when certain situations are considered to be advantageous in helping a model/ rising star get ahead in the entertainment industry. Bodies become commonly the bartering chips for both men and women.