It is not uncommon to hear stories of extreme fans harassing and stalking celebrities, but it turns out that even their wax figures are facing the same – if not more triggering – acts. Popular mainland Chinese actor Yang Yang (楊洋) experienced this unfortunate circumstance and became the center of hot discussion online after a female internet celebrity posted a video of herself vehemently touching his wax figure inappropriately on November 17. Netizens expressed their discomfort at her actions and criticized her for disrespecting the actor.

Breaking out with his performance in romance drama Love O2O <微微一笑很傾城>, Yang Yang immediately surged in popularity and was labeled a male god. With a huge fanbase, his influence proved to be enough for the well-known wax figure museum, Madame Tussauds, in Shanghai to make a wax figure of him.

The wax figure closely resembled Yang Yang, and his attractiveness was apparently the reason why the internet celebrity live-streamed herself sliding her hands over his chest and further inside his suit. She continued by unbuttoning his suit and sliding her hand down to feel his body. She also commented, “I’m honestly so shy.”

A netizen who couldn’t stand such behavior snapped at her and said, “Can your hands be more upright?” In response, she wrote, “Itchy hands,” along with a shy looking and pouting emoji.

Although there are no restrictions when it comes to touching a wax figure as long as there are no damages, netizens felt extremely uncomfortable and upset at the internet celebrity’s actions. They expressed, “Art is meant to be appreciated and not there to be tainted”; “Be aware of your actions in public”; “Have some respect for the wax figure, what are you doing”; “This is too disgusting, I’m going to vomit.”

On a similar note, Yang Yang’s fans felt pain for their idol for experiencing such disrespect. They commented, “Stop sharing, have some respect for Yang Yang.” 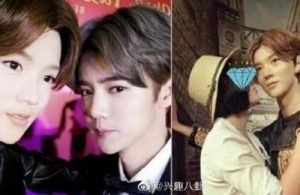 While the video became viral, this was not the first time that a wax figure faced such actions. Previously, a netizen shared that the wax figures of both Lu Han (鹿晗) and Kris Wu (吳亦凡) were also treated in very bewildering ways. Visitors kissed Lu Han’s wax figure so many times that his lips lost the paint, while a woman wearing a wedding dress had proposed to Kris’s wax figure. 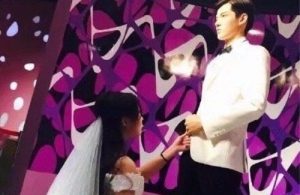