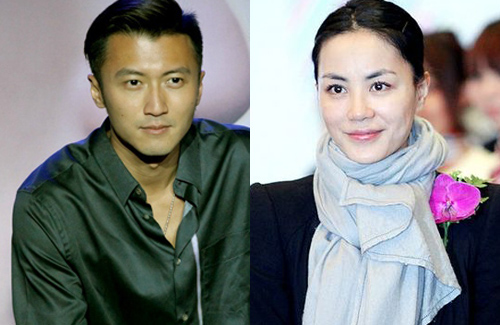 Nicholas Tse (謝霆鋒) and Faye Wong (王菲) have been eager to make up for lost time after reconciling their romance this year. Frequently visiting Faye at her Beijing home, Nicholas was photographed unable to keep his hands off Faye as the couple lingered in each other’s embraces and kissed passionately. Recently spotted with a small bump on her stomach, Faye is speculated to be pregnant with Nicholas’ child.

After Nicholas and Faye were photographed secretly spending quality time in Faye’s apartment in Beijing for four straight days, the couple went their separate ways due to their busy schedule. While Faye had to fly to Taiwan to complete a new commercial, Nicholas headed back to Hong Kong for the recording of his reality television program.

The couple made sure that after their work is complete, they will have quality time together. Nicholas revealed that he would be taking a month off for vacation time after his filming is completed.

Although Nicholas and Faye managed to rekindle their relationship after a decade of separation, Faye is reportedly still wary of Nicholas’ relationship with ex-wife, Cecilia Cheung (張栢芝). Faye is afraid that Cecilia will her sons, Lucas and Quintus, as excuses to see Nicholas more often. Not wanting Cecilia to come between her relationship with Nicholas for a second time, it is rumored that 45-year-old Faye became pregnant so she could lock in 34-year-old Nicholas for good.

Faye’s close friend, Carina Lau (劉嘉玲) was asked to comment on Faye’s rumored pregnancy. Carina has not seen Faye in awhile, but continued to text message her. Carina said, “I don’t believe in the rumors. But never say never; anyting can happen. I’m happy as long as my friends are happy.”

Cecilia Only Has Eyes For Lucas and Quintus

Although reports claim that Cecilia was always looking for reconciliation opportunities with Nicholas, her main focus has been her two sons all along. Cecilia never badmouthed Nicholas in front of Lucas and Quintus. Since Nicholas rarely saw his sons due to his busy schedule, Cecilia often plays his movies for the boys so they can see their father on television.