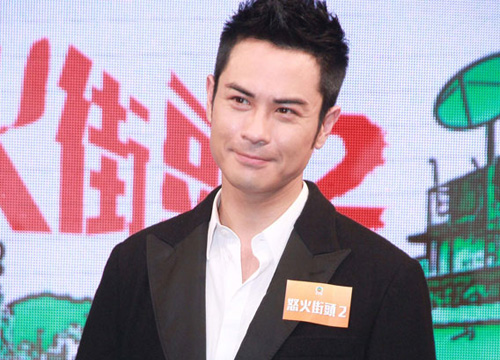 With its former monopoly over the Hong Kong television broadcasting industry about to be challenged by newly formed stations this year, TVB was anxious to showcase their best dramas. The international Hong Kong television and film expo, Filmart 2012, was held last night. Since TVB regarded the event with utmost importance, TV King, Kevin Cheng (郑嘉颖) especially took a red-eye flight from China to attend the event in Hong Kong.

Although TVB’s dramas continued to rake high ratings in Hong Kong, the general public sentiment was that their productions were often rushed, featuring partially inexperienced cast and containing weaknesses in script. Kevin noted that mainland China productions have already surpassed TVB dramas in the ancient series genre, due to the realistic sets and rich historical details. Nevertheless, Kevin put in a good word for TVB, “As for modern dramas, TVB series are more enjoyable to watch, due to the faster pace.”

When TVB dramas have all the right elements in place, such as last year’s Ghetto Justice <怒火街頭>, they prove that they are once again the ratings champion. Due to Ghetto Justice, Kevin swept multiple Best Actor awards across Asia. TVB hoped to replicate the success again with the upcoming Ghetto Justice 2, which had completed filming at the beginning of the year. In the last installment, Kevin’s character, “Law Ba” landed in jail for pushing the boundaries of the law in the name of justice. What twist will the sequel pull to allow “Law Ba” to continue to use the law to help others?

Kevin revealed that the best qualities of “Law Ba,” which included his uncouth mannerisms, casual attire, and laid back attitude will be seen in Ghetto Justice 2. The legal cases in the sequel will be more relatable to the public. In addition, “Law Ba’s” romantic life will be complicated by the return of his ex-wife, Christine Kuo (苟芸慧), who will fight for his heart along with Myolie Wu (胡杏儿 ). With the majority of the cast reprising their roles, they were able to delve deeper into the characterizations.

Asked if he possessed the confidence to win the TV King title two years in a row, with Ghetto Justice 2, Kevin Cheng said modestly, “I always go by the popular vote. If it were not the popular vote, then it will hurt you more if you win the award!” Kevin noted that he felt Kenneth Ma (馬國明) possessed a good chance this year due to his recent popularity in The Hippocratic Crush <On Call 36小時>.

Although Kevin was currently hot in demand in mainland China, he revealed that he considered the Hong Kong market to be equally important. After completing mainland drama, Red Dust <滚滚红尘>, he will be filming new TVB drama, As Far As The Storm <万水千山风雨情> later in the year. The drama will be a joint production between TVB and a mainland television station. Filming on location in China, the story will be set in the pre-modern era, resembling Country Spirit <茶是故乡浓> and revolve around a large family.

Jayne: Looks like another fruitful year for Kevin. His income must be the highest male actor at TVB now due to such high salaries in mainland. Moses Chan may be second highest since he is still very popular with advertisers.