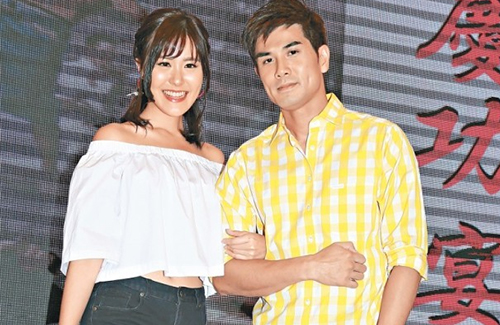 The highly-anticipated ending for TVB’s latest hit drama A Fist Within Four Walls <城寨英雄> finally pulled down its curtains on Sunday. Whether or not the series finale had brought the tale to a satisfying conclusion is up for debate, but there is no denying that the drama had pushed all the main cast to overnight levels of fame, supporting cast included.

Philip Ng’s “Lung Shing-fu” and Moon Lau’s “Audrey Or” are one of the most popular characters on the show, and their pairing is definitely among the most well-received. Many fans even hope to see Philip and Moon get together in real life, as the actors themselves admitted that they grew close after collaborating in Four Walls. But it’s going to be a while until we get to see Philip and Moon together again. Due to Philip’s busy schedule of promoting his film Birth of the Dragon, the onscreen couple had no choice but to turn down many of their couple appearance offers, losing up to a million dollars.

Philip’s manager said, “It’s true that Philip got a lot more show offers [since Four Walls broadcast], but because of other work he had to turn them down.” (Lost a lot of money?) “You can’t really put it like that. The jobs we have at hand now were accepted a lot time ago, so we have to complete them before we do anything else.”

Moon said she doesn’t blame Philip for turning down the offers, saying, “I know he’s very busy. Our agencies will handle our future appearances. I’m sure there will be that opportunity!” (You just lost the chance to earn more though!) “It’s all about fate when it comes to this job!” (Will you get Philip to treat you for dinner?) “Of course I will! Because of Four Walls’s success, he’s going to have to treat me to more than one!”

At the celebration banquet for the Four Walls’ finale on Sunday, Moon and Philip were once again asked to comment on their dating rumors. Moon said, “We’re good friends. We worked together for over three months so we were around each other the most.”

Moon and Philip admitted to getting close on set. Even costar Yuen Qiu (元秋) thought they were dating. Has Philip started pursuing Moon yet? Moon said, “Nope!” (Many fans want you guys to be together!) “I know! But these things can’t just happen like in dramas.”