When it comes to stock investments, Frankie Lam (林文龍) depends on his luck and not strategy to earn money. Blessed with great luck, he even surpasses professional stock experts in gains, and never loses any money because he always manages to avoid financial crises and unpredictable situations. This cannot be said the same for his businesses however, since they all end in failures and significant losses.

In 1997, Frankie’s instinct had saved him from losing millions of dollars in Hong Kong’s financial crisis. With significant stock investments, he said he was so engrossed at the stock list, that he would make sure to analyze the stock condition every day, watch the financial news first thing in the morning, and constantly keep his eye on it. Everyone was doing the same, from his co-workers to the janitor lady, and to the auntie who sold vegetables at the market. Yet, he had a bad feeling, so he chose to trust his instinct and pull out his money before the stock market crashed.

While Frankie was lucky to not lose his fortune in the stock market, he had suffered significant losses with his failed film and Malaysian restaurant. After these experiences, he realized that he isn’t suited to do business, and making large investments will not necessarily bring success.

Frankie felt that acting is still his best strength. Skillfully adapting his personal financial experiences to better portray his role as a fund manager in Another Era <再創世紀>, Frankie was widely praised for his dimensional character.

Frankie is a Good Father 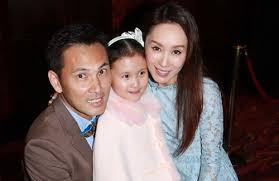 As for his personal life, Frankie is spending more time with his wife, Kenix Kwok (郭可盈), and their 8-year-old daughter, Tania. He expresses that communication is very important, so he and Kenix would would directly take Tania to school and talk with her about her studies and school life. “I can confidently say that I’m a good dad.”

When asked how the couple maintains their romance, since they focused so much on their daughter, Frankie said he isn’t romantic. Having an understanding and being able to embrace each other’s flaws is the most important.

For a 50-year-old, Frankie still looks very youthful and charismatic. He said, “The key to looking youthful, is to have a healthy lifestyle. I don’t smoke. I only drink when there are celebrations. I also sleep and wake up early, drink a lot of water and do a lot of exercise.”

In terms of personal goals, there are none. “Of course, I’ll still work on improving myself. I’m happy with what I have now.”

Frankie reveals ATV will be filming dramas in 2020.