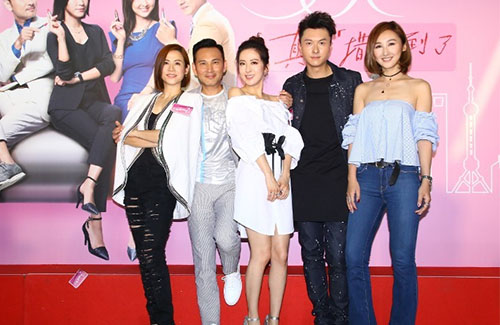 My Unfair Lady is Frankie’s first TVB drama since 2008’s Forensic Heroes II <法證先鋒II>, and Jessica’s first since 2012’s Tiger Cubs <飛虎>. Frankie and Jessica, both who have been out of Hong Kong’s network primetime shows for some time, are unsure about what constitutes a good rating, but they are confident that their show will find success.

“If 24 points is considered a good, then I guarantee you it’ll get higher than that,” said Frankie.

Although Frankie and Jessica play a couple in the series, their characters do not mesh well. Jessica added that she does not have many intimate scenes with Frankie, who joked that the highlight of the series is not the romance, but Jessica’s acting. Jessica then admitted, “That’s why it took four months to film. I wasted time rolling my eyes all day.”

My Unfair Lady’s Chinese name, “The Woman Who Doesn’t Know How Act Cute”, centers on Jessica’s character Mall, a woman in her 40s who has no interest in getting married. The drama also touches on the lives of other women in her life, who all have different views about love.

Natalie said she has realized the “benefits” of acting cute, and wants to learn how to perfect it. Asking if she would act cute in real life, she said, “Every girl would do it. As long as she’s happy and her boyfriend won’t make her mad, then she’ll act playful and cute.” Asking if her boyfriend, Tony Hung (洪永城), likes it when she acts cute, Natalie told reporters to ask Tony that question instead. Natalie changed the topic when reporters asked if Tony had gotten her mad before.

The topic then changed to the concert musical The Storm Show <風雲5D音樂劇>. Natalie was spotted watching the show with Kenneth Ma (馬國明) a few days ago. The duo were there to support Kevin Cheng (鄭嘉穎), who plays the lead character Wind.

On why it wasn’t Tony who went with her, Natalie quickly explained, “I went to watch it with my [A Fistful of Stances] family. We all went there to support [big brother] Kevin. Don’t make it sound like something’s going on between me and Kenneth!” (Why didn’t you ask Tony to go with you?) “Kevin arranged the tickets.” (Did Kevin forget that you and Tony were a pair?) “I think Grace Chan (陳凱琳) being there is more important for him.”