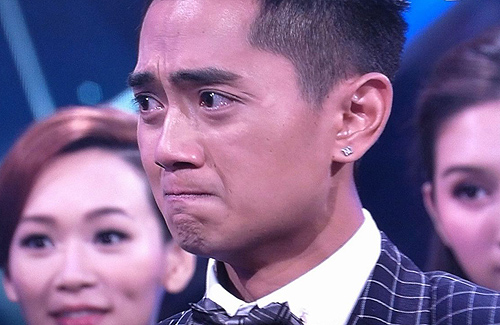 The finale of TVB’s singing competition, The Voice: Stars’ Legend <星夢傳奇>, aired on Sunday, October 13. An early favorite on the show, Fred Cheng (鄭俊弘) emerged as the big winner of the night.

Fred came in first place with 161,046 votes from the audience, which is more than half the votes of the rest of the winners. In second place was Hoffman Cheng (鄭世豪) with 42,136 votes. Corinna Chamberlain (陳明恩) came in third with 20,114 votes, and Yiu Bing (姚兵) took fourth place with 14,634 votes.

In addition, Fred also took home the Professionally Chosen Performance Award due to his amazing singing that night. The judges for the award were Alan Tam (譚詠麟) and Eric Moo (巫啟賢). In particular, Eric took a strong liking to Fred and dubbed him as the “Next Eason Chan (陳奕迅)”. In total, Fred pocketed $600,000 HKD as well as a microphone made of gold and diamonds worth $338,000 HKD.

Since the airing of The Voice: Stars’ Legend, Fred’s recognition levels shot up. Although he played supporting roles in TVB series for a decade, viewers were often unable to remember his real name in the past. The music competition allowed Fred to showcase his talents, and inspire viewers with the underdog story that perseverance and hard work pay off.

Back in 2001, Fred participated in TVB’s Chinese New Talent Singing Competition, where he won second place. After the experience, he never dreamed of stepping onstage once again to sing. Fred had tears in his eyes and thanked his family and company for being there for him with a touching speech. He is very grateful for the opportunity, and has decided to give all the money to his mother.

On his victory, Fred said, “For many years, I have given my all, but received zero returns. Now, I learned how to face things with a normal attitude. I will do my best, but without any expectations of returns. The most important thing is to enjoy the process.”

Hoffman was another under-appreciated actor  at TVB, playing minor roles and stunt doubles for twelve years. He had tears in his eyes several times throughout the night. When it was announced he came in second place, he could not help but cry once more. He admitted, “Fred had to calm me down again. I never thought [of winning an award]. I’m really happy. Thank you, thank you!”

Corinna decided to challenge herself that night by singing Kay Tse’s (謝安琪) “I Sing Therefore I Am” <我歌故我在>, which hit very high notes. Coming in third place, she was not disappointed with her decision. It did not matter to Corinna whether she could have been better off with an easier song, because she sang with all her heart. In the near future, she would be busy preparing for her upcoming record album and solo concert.

Although Yiu Bing received no awards for coming in fourth place, he expressed he has won on the inside. He gave a touching speech to his wife, announcing that he would like to hold a grand celebration for their 10th wedding anniversary three years later. “We didn’t have a very good wedding ceremony at the time, since we didn’t have much money. I want to have a good celebration and invite all our friends.”