Fred Cheng (鄭俊弘) and Stephanie Ho (何雁詩) have let the (not-so-big) cat out of the bag! The pair, who held their belated wedding banquet in November, recently released a duet performance titled “Dear Little One” with melody and lyrics penned by Stephanie herself. The song’s lyrics “Dear little one/I saw you for the first time/in time you will be mine” led netizens to congratulate the couple on becoming parents, but they did not immediately respond. It was on January 13 that the pair finally confirmed the good news by announcing that baby no. 1 is on the way! 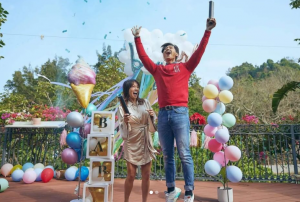 29-year-old Stephanie announced the good news on her profile with a classic photo of ‘heart hands” on her belly while the two locked lips. She wrote, “we are so excited to welcome our June baby boy in 2022. i have had soooo many dreams of being a mother and my dreams are finally coming true in the year of tiger!” Calling Fred the most “loving, funny and supportive partner” she could wish for, the singer confessed that mommy hormones are making her feel unlike herself at times, and thanked Fred for embracing all the changes, adding that he is “going to be wonderful father”.

As for Fred, who revealed that the expected date of delivery is sometime in mid-June, he admitted experiencing a roller-coaster of emotions from joy and anticipation to worry, but surmised that their little one will be “born into a very different world from which we are born in”, which is why his only wish is for the child to be “kind, healthy and happy”.