Stephanie opens up about her low points and shares what she loves about Fred.

From taking part in The Voice <超級巨聲> as a student at 16, to becoming a singer and then an actress, Stephanie Ho (何雁詩) has literally grown up in the public eye. Evoking public brickbats for her relationship with fellow artiste Fred Cheng (鄭俊弘) in 2017 since he was already engaged to another woman when they met, Stephanie recalls the tough experience. Despite the negative backlash, Stephanie felt it was all worth it because Fred is a “very nice person with a good heart.”

The couple got married in November 2020, and held a belated Hong Kong wedding banquet one year later due to the pandemic.

Having had three pathways to choose at her life’s crossroads – be a professional golfer, further her studies in the hospitality and dining industries or become an artiste, Stephanie took the last option, though it enraged her father so much the two did not speak for an entire year.

Starting to date when she was only 13, Stephanie experienced a spate of emotional problems when she fell out of love. “I lost weight and was 70 pounds at my lightest. Afterward, I overate so much that I reached over 110 pounds.”

She also had money troubles with a few ex-boyfriends, as one did not return what he borrowed from her, while another would even borrow money from her friends.

Surviving “That Chapter” in Her Life

Stephanie fell in love with Fred, a fellow artiste at recording company The Voice Entertainment in 2017, while filming a travelogue together. As they got to know each other more, Stephanie told asked him “what our relationship was, and maybe we should be together.”

Afterward, Fred was exposed to be already engaged to another woman while Stephanie unknowingly became the third party. The two suffered negative backlash and ended up being frozen by their company.

Stephanie recounted the chapter of immense pressure in her life when the paparazzi was relentless, “There were too many reporters outside. There was nowhere to hide, and we were forced to co-habit, ironically.” The singer moved into Fred’s home and stayed indoors every day. “Because of the news, we needed each other’s support so we moved in together. After co-habiting, we found ourselves a great match, and decided to get married. We need to thank everyone.”

Stephanie’s greatest source of support during the crisis was her mother. “If we were stuck at home due to reporters outside, Mom would send supplies to us. Once, she rented a 7-seater car to let Fred and me lie in the car with the curtains drawn to get us out secretly. I would call her up every time I wanted to cry. Even now, she would pick up my calls at 4 a.m.”

Although it was a stressful time, Stephanie also grew as a person. “It’s equally important how you live for yourself, or how you show others how you live. I’m very grateful for my experience then, so I know how to face myself more honestly and accept criticism from others, and to learn from others.”

Does Not Fault Fred 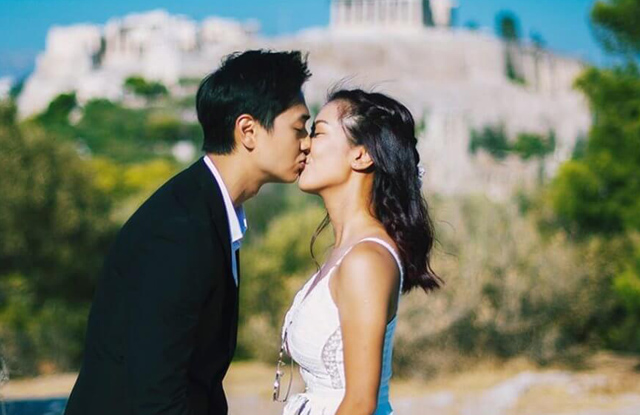 Asked if she ever doubted her decision of being with Fred, Stephanie realized that she had “chosen to be with this man,” she decided to “work hard on building the relationship.”

Stephanie added, “I have never faulted him until now, after going through so much I feel it’s worth it as this (man) treats me very well and is very willing to put in efforts, plus doesn’t mind my messy habits. I’m grateful that I finally am in a conflict-free relationship, unlike my previous dating experiences. We are surprisingly compatible.”

Calling herself a very messy person, Stephanie confesses that she would take off her shoes, socks, pants and shirts upon reaching home, forming a line of garments on the floor, while Fred in contrast is very organized. Despite his initial shock at Stephanie’s habits, Fred would use a humorous way to let her know how he felt, “asking” Stephanie why her dog would pile the clothes and socks haphazardly.

When speaking with former TVB General Manager Stephen Chan (陳志雲) about Fred, Stephanie admitted that she was attracted to Fred because of his good looks and joked that TVB has a lot of handsome men. Stephen immediately asked, “Did you and Brian Tse (謝東閔) date before?” Although caught off guard, Stephanie did not deny it, “I never revealed this before!” while adding that Brian is a very nice person.

Leaving her record label due to a discord in opinion, Stephanie is now an independent singer and produces her own songs. She has already released the single “To The One Who Dreams” <致有夢想的人>, while singing the ending theme song “Opponent” <對手戲> for Al Cappuccino <反黑路人甲>.

Each song and music video required over $100,000 Hong Kong dollars to produce, but Stephanie continues to fund her passion, though she knows she would have to work doubly hard to supplement her income as her bank balance has been dwindling. However, Stephanie has always been someone to follow her own heart.