Fred Cheng (鄭俊弘) and Stephanie Ho‘s (何雁詩) wedding will take place on November 7. With only one more week left, the excited couple has been regularly sharing snippets leading up to the big day. Stephanie does not feel too nervous, and some friends are even commenting that she is too relaxed! 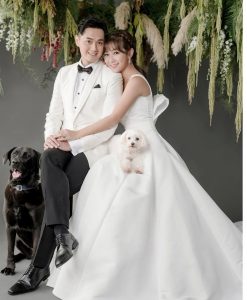 Their wedding plans evolved from a California wedding to a local celebration in Hong Kong because of elevated COVID-19 cases gripping the United States. Stephanie said, “The most complicated part was the ever changing plans due to the pandemic. We revised some of our plans this month, and switched to a smaller venue. We will also be eating dinner with friends and family first.”

A pre-wedding gift Stephanie prepared was writing  love song “Basic Love” (基本戀愛套路) for Fred and inviting him to star as the male lead for the music video, which was released on October 18.

Fred’s fans also prepared a big surprise for the couple by purchasing an ad unit on the #117 bus in Kowloon. Fred and Stephanie’s engagement photo, where they are seen kissing, is fully wrapped outside the bus’ exterior. Fred’s fans chose the #117 bus because their wedding date is on November 7.

Though the bus ad is eye-catching, opinions are polarized over the gesture. Some feel that it is very sweet and romantic, while others think that it is over-the-top and sarcastically questioned when the bus had turned into a wedding car.

​The negative remarks did not make Stephanie unhappy, as she realizes that people will react differently to the situation. She and Fred were unaware of bus ad, and only learned of it when netizens tagged them on Instagram. Initially, the couple even wondered if it was a fake and photoshopped photo!

The ad will run for two months at an approximate cost of $57,000 Hong Kong dollars, and Stephanie would like to thank Fred’s fans for such a thoughtful gift.