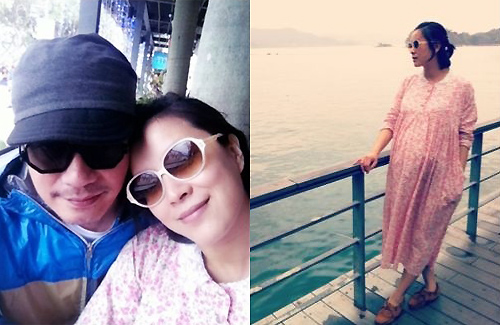 Gallen Lo (羅嘉良 ) and his wife, mainland actress Sophie Su (蘇岩),  are expecting the birth of their daughter next week, when Sophie will go under the knife to welcome their baby. The couple are currently in Hong Kong, to take advantage of the advanced local healthcare.

Gallen and Sophie have been spotted combing the streets of Causeway Bay, buying up a storm. Gallen beamed, “We have chosen to go for a C-section in mid-April. We have to prepare for our daughter’s birth and buy all the necessities that we can find in Hong Kong because there is more variety here.” Gallen revealed that shopping has always been Sophie’s favorite past-time, so much so that the heavily pregnant Sophie with the 7-pound baby inside her, can shop from morning until night with only a short rest in between.

Since the 2008 infant formula scandal, in which mainland Chinese manufacturers added melamine to its formula products, smugglers are buying up Hong Kong’s formula supplies, causing a sharp shortage. However, Gallen is not the least worried. “With our sponsor for formula milk, we are able to feed [our daughter] until she is 4 or even 5 years old! Anyway, Sophie plans to partially feed her breastmilk so we should have enough.”

Lesser known to the public is that Gallen’s siblings are talented in the arts. His younger brother, Hong Kong oil painter, Lo Ho Wah (羅浩華) whose art piece, “Waiting” <等待> is currently being auctioned off at Sotheby’s Auction House.

Lo Hou Wa’s “Waiting” depicts an old lady standing by a banana stall and waiting for customers, was one out of 658 items featured in Sotheby’s Hong Kong Spring Sales 2013 auction. Considering that several of the items featured were award-winning art pieces, “Waiting” is also highly regarded when Sotheby’s invited Lo Hou Wa to auction his painting.

Gallen confirmed through a telephone interview, “I am so honored and proud that my brother’s artwork is featured in Sotheby’s but I don’t know why they chose his painting.” Gallen revealed that both of them were interested in the arts since young. While he liked Chinese calligraphy, Ho Wah has always loved oil paintings. Gallen explained, “We used to live on Chilung Street in Sham Shui Po where there was a wet market. My brother loves to paint these people and their lives in his paintings.” Likewise, “Waiting” was rendered from one of the many photographs Ho Wah took while strolling the streets of Sheung Wan.

Gallen’s youngest sister loves to work with print media as well, but her specialty is photography. Having won scholarships for her photographs before, she likes to travel around the world, taking pictures and sharing them with Ho Wah so that the latter can depict them in his oil paintings.

When Gallen has meals with his colleagues, he likes to show off his brother’s works to his friends. He said proudly, “No matter if it’s real or not, when I hear my friends praise how realistic and good my brother’s works are, I feel very satisfied.”