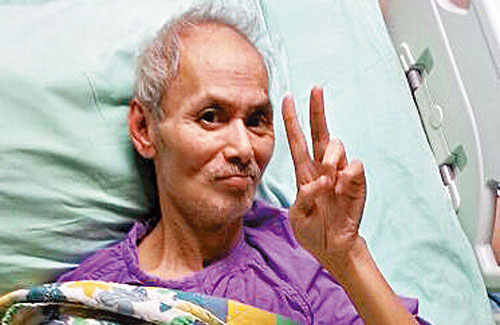 Since a stroke left him wheelchair-bound in 2011, Gordon Liu (劉家輝) has been battling family discord and financial troubles in the public spotlight. Rumors afloat that Gordon’s wife and children are eyeing his money and that his former assistant Eva Fung is also refusing to return his cash assets worth millions (HKD). At the end of 2012, Gordon made a sudden decision to appoint close friend Amy Fan (樊亦敏) as his guardian. Amy has since served as Gordon’s spokesperson and delegated his assets to pay for his increasingly expensive medical bills.

On Monday, Amy invited Ming Pao to a sit-down interview with Gordon to clarify rumors once and for all. Amy stated that this will be Gordon’s last public interview as he wishes to quietly recuperate. Gordon was quiet nervous the night before, but agreed to the interview for the sake of his friends and fans who are worried about his well-being.

Gordon accepted the interview at his private hospital room, accompanied by Amy and his psychiatrist. He appeared frail and seemed to have lost weight dramatically, weighing only 120 pounds. Gordon was in good spirits when reporters arrived, asking to eat when he saw cake and smiled when posing for photos. Amy was attentive by his side, making conversation while filing his nails.

Gordon became nervous however when reporters attempted to begin the interview. He repeatedly asked to change his incontinence pads to force reporters out of his room. Gordon eventually calmed down when reporters removed the cameras. Due to his speech difficulties, Gordon responded to questions mostly by shaking and nodding his head.

During the interview, Gordon expressed that he is happy. He admitted that it was his personal decision to appoint Amy as his guardian and he is happy under her care. He wants Eva to return his money, and wishes to see his relatives and niece his niece.

When asked if he would like to see his wife and two children from his second marriage, Gordon suddenly frowned and signaled for the reporters to leave. Although Amy and his psychiatrist both tried to comfort him, Gordon decided to end the interview and waved goodbye.

Reporters also reached out to Eva on Tuesday regarding Gordon’s comments. Eva stated she will speak when the timing is right.