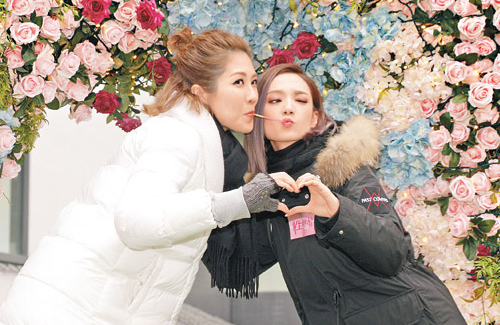 The cast of TVB’s romantic comedy drama Come with Me <性在有情> attended an outdoor promotional event together a few days ago to talk about their new show, which is currently airing every Sunday night. The cast talked about their plans for upcoming Valentine’s Day and shared some thoughts on how to make the day “sweeter and sexier.”

Grace Wong (王君馨), who married her longtime boyfriend Daniel this past summer, said she’ll be having a “simple” Valentine’s Day dinner with her husband. Expressing that they would probably have a healthy dinner, Grace said, “We’ve both been working out, and my husband gets fat easily. He cooks with little salt and little oil. I do hope that we’ll get to have more tastes for Valentine’s Day!”

Sharon Chan (陳敏之), who is now a mother, was asked if she expects her upcoming Valentine’s Day with her husband to be just as romantic as before. Sharon laughed and said, “Of course not. Things will definitely get busier, as we now have a baby. In the past my husband would make a western dish for Valentine’s Day, and we can do it this year too. Having a son with us actually makes everything more sweet.”

Grace then asked, “Will you guys be doing anything more fun then?” Sharon joked, “In terms of what? Like lingerie? I saw that you’ve purchased some.” Grace replied, “They’re more on the sexy side.” Sharon joked, “If you get sexier than you already are, that baby’s going to come soon!”

Asking if Sharon would like to purchase some fun, role-playing lingerie, she said, “I rather not. I’m afraid of the cold, haha!”