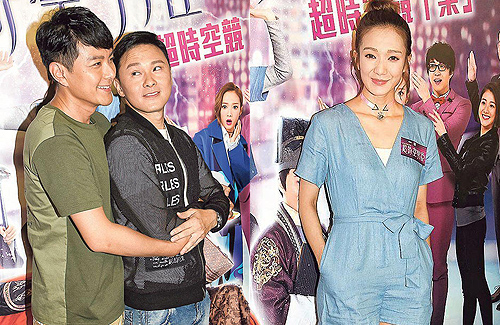 At a promotional event for A General, A Scholar, and an Eunuch <超時空男臣>, Grace Wong (王君馨), revealed her husband Daniel‘s shocking reaction when he watched her kiss scene with Raymond Cho (曹永廉).

Unable to contain her laughter, Grace said her husband started cursing when he saw the kissing scene. Upon hearing this, Edwin Siu (蕭正楠) jumped in, “Of course, if my other half has to kiss Raymond, I would be swearing too. Pretty sure it’ll be multiple swear words. He [Grace’s husband] is already very conservative and very polite. Your husband has good manners.”

When asked what he would do if his girlfriend Priscilla Wong (黃翠如) were to kiss his good friend Raymond in a drama, Edwin laughed, “I would tell her to reject the series! I wouldn’t be able to take it, I just can’t do it. I don’t know how many times she’ll have to rinse her mouth before I can kiss her. I would die.”

Not surprised at both Daniel and Edwin’s reactions, Raymond revealed that his wife has not watched the show yet, but perhaps she would be equally as angry. Siding with Edwin, Raymond said he would turn down kiss scenes with Priscilla in the future for the sake of their friendship.

After a week of broadcast, A General, A Scholar, and an Eunuch has been performing fairly well, averaging 24.5 viewership points so far. Even TVB Chairman, Charles Chan (陳國強), complimented the series. Hoping to boost ratings, Edwin jokingly suggested that Grace should kiss Raymond again in celebration if the ratings keep increasing.