Priscilla Wong (黃翠如) had worried fans when she turned off her Instagram comments five weeks, ago and absented herself from recent drama publicity. While it was not revealed what personal battle she was facing, she has since returned with a social update after exactly 20 days.

On September 30, the 39-year-old posted a photo of a group of 17 raising their hands together while facing the sea in a dawn/dusk-like scene. It was not possible to tell from the back views of the group attired in jogging wear which one was Priscilla. Her short one-liner caption “Full of love and energy” along with a red heart emoji did hint at an improved emotional state.

Five weeks ago, she had written “Goodbye,” locked her IG comments, and even absented herself from drama publicity and work activities in an apparent need for space, which raised the concern of celebrity friends and fans. 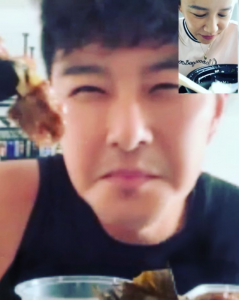 Talk surfaced that the Battle of the Seven Princesses <七公主> actress might be suffering burnout from the drama, as she had admitted to losing ten pounds while filming.  However, she later clarified that she was going through a “personal grieving” episode, and thanked the public for their concern.

Luckily, husband Edwin Siu (蕭正楠), though away in China for work, was there for her emotionally the two shared a meal via a video call, which she had posted and penned, “Some days, you know there’ll always be someone foolishly by your side, although with some distance between you. During tough times, take a deep breath, furrow your brows, and then move forward. Life is not perfect like Instagram, but with love, you can find light even in the darkness.”

With Priscilla reactivating the comment function on the platform, it is likely that she is now feeling ready to get back on track and start anew. Her good friend Debbie Goh (吳天瑜) wrote “strong girl!” as encouragement, while Yoyo Chen (陳自瑤) also sent an affirming message.