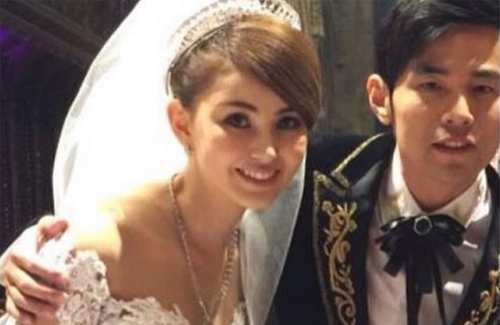 After her marriage to Jay Chou (周杰倫) on January 17, Hannah Quinlivan (昆凌) has become a hot gossip magnet. Aside from digging up old pre-debut pictures of the 21-year-old, netizens also found old clips of Hannah confessing that she had “unrequited love” for her idol, Taiwanese pop singer Show Lo (羅志祥).

In an old episode of the variety show Blackie’s Teenage Club <我愛黑澀會>, which aired in 2008, host Blackie Chen (陳建州) discovered a love letter Hannah allegedly wrote to Show Lo when Blackie paid a surprise visit to Hannah at her house. Hannah, who was 14 years old at the time, wrote that it was okay if Show did not love her, but regardless of what happens, she would always silently watch over Show and wait for him.

When asked about Hannah’s love letter, Show appeared embarrassed and stressed that Hannah is already married. “Admiration is admiration. The one she loves is Jay. Good wishes to them.”

Show’s response apparently did not sit well with Jay’s dance instructor Snow, also known as Ice Cream (雪糕). On his Weibo microblog, Snow accused Show for starting rumors and hyping up his relationship with Hannah.

Snow wrote, “If you already know that the notebook was a fake love letter prepared by the producers, and not something she wrote herself, then why are you still using it as a joke? The groom doesn’t mind, but as Jay’s friend, do you think this is an appropriate act?”

Another of Jay’s choreographers, Hsiao Mai (小麥), also responded on Weibo, “If Show’s response was clearer, the groom and the bride wouldn’t have to deal with such trivial news. Right? Or maybe, he actually thought the love letter was real?”

Snow and Hsiao Mai’s reactions angered Show’s manager, who clarified that the old clip was dug up by reporters and Show was only responding to media questions. Asked if Show was aware that the letter was fake, his manager said, “It’s been many years. Show doesn’t even remember.” His manager then added, “Please make certain of the situation before speaking up. Think thrice, Mr. Snow.”

Show dismissed the incident lightly at a recent promotional event, expressing, “Let it go with the wind.”

Snow and Hsiao Mai’s outburst led to speculation that they may be trying to publicize their new band CUG, which also includes the dancer Ken.

However, Jay came to his friends’ defense. Currently enjoying his honeymoon in Europe, Jay wrote on his official Weibo, “Brothers, speaking up and standing up for me can only mislead people. I think you guys have worked hard. Don’t be bothered by such things. It’s enough that we know. But you issued comments without asking me first…. I guess this is what it means to be brothers!”