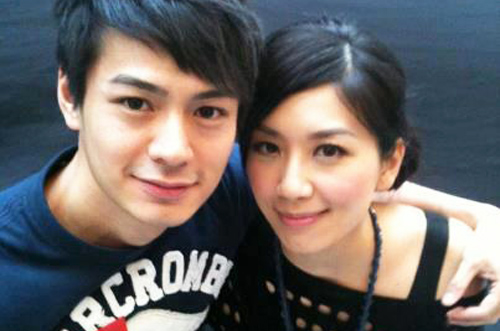 Having collaborated five times already, would Him Law (羅仲謙) and Mandy Wong (黃智雯) get sick of working with each other for a sixth time? Him and Mandy immediately replied in unison, “No!”

Twenty-eight-year-old Him Law and 29-year-old Mandy Wong both debuted at around the same time in the industry. In fact, it is perfectly logical to say that they are TVB’s golden twins.  Both Him and Mandy began filming television dramas for TVB in 2008. Both Him and Mandy began to receive notable attention from Hong Kong audiences in 2009 after giving eye-catching performances in D.I.E. Again <古靈精探B> and A Chip Off the Old Block <巴不得爸爸…> respectively. When they starred together in 2010 ’sSuspects in Love <搜下留情>, Him and Mandy received the same amount of attention and popularity from fans.

Since their television debut in 2008, Divas in Distress <巴不得媽媽…>in 2012 was their fifth time collaborating together. Having already appeared in four dramas together, Him and Mandy feared that the audience would perceive them to be a boring and redundant couple. Much to their surprise, not only did the audience not complain, the pairing became even more popular than before.

Him and Mandy expressed that they would not mind working with each other again, but it would be better if they could portray a different relationship next time around. “Maybe siblings, twins, or even sisters!” Mandy said excitedly.

Him added, “Being enemies aren’t bad either… like the kind in which I killed off her entire family,” he joked.

“It’s like my brain stops feeling so heavy when I know I’m working with Mandy,” explained Him. “We know and understand each other’s limits, and we know how to work around them.”

Him said that he takes care of Mandy really well, and compares his attentiveness to that of his character, Vincent, in Divas in Distress. “I’m not gentle on her at all, and I treat her like a man! For example, when I see something wrong with her hair or makeup, I will not help her fix it like what other attentive boyfriends and brothers would do. I will directly say to her that she looks ugly, and I’ll tell her to fix it herself! This is brotherhood!”

So is Him’s relationship with Mandy a kind of brotherhood or sisterhood? Him laughed, “Haha! If you ask this question to Mandy alone, she will definitely say we are sisters. Since you’re asking me, of course I’m going to say that we are brothers!”

Him: “I Have a Very Boring Private Life”

Many Divas in Distress fans found Vincent and Yihei’s relationship to be very romantic, and it has helped Him Law’s female fandom to increase dramatically. Him sighed, “I’m actually not a very romantic person myself. I have a very boring private life. I don’t know how to deal with interpersonal relationships, and I definitely never tried pursuing a girl like how I did in the drama.”

Him continued, “I am actually a pretty talkative person, but somehow whenever I am with a large group of people, I become really quiet. I just don’t know how to socialize!”

Him does not consider himself to be a party animal. He has nowhere else to go after work except going home or going to the gym. When he has free time, he will go out with his friends, but instead of clubbing or drinking, they will go to the beach, take a swim, or walk their dogs.

“Maybe it’s because I live far away, but I really don’t go out very much at night. After work is over at night, all I can think of is to go back home and sleep.”

Him considered moving out from his current home in Tai Po to Kowloon, where it is more convenient for him to get to work. However, after tabloids claimed that Him was in a poor relationship with his family, he decided against it. “I don’t want to fuel the fire. If I really did move out, the tabloids would seize this opportunity to make up more bad things. I do like to view things in an optimistic mindset. I never take these reports seriously. All that matters is that my family understands me. If I do move out, I will definitely leave my keys with them so they can visit me whenever they want.”

Him Law and Tavia Yeung (楊怡) reportedly began dating after working together on the set of The Hippocratic Crush <On Call 36小時>. Although both parties denied, Him’s recent “car-shaking” with Tavia has indirectly confirmed that the pair are indeed dating.

Him does not like to talk about his dating life very much. Him believes that the only way a relationship would last is if he complies with fate. He explained that he would only openly admit to a relationship if he gets married.

Mandy, on the other hand, is very open with discussing her relationship with others. Although she is currently single, she hopes that she will be able to find someone who is mature, calm, intelligent, and can give her a sense of security. “I am a very forgetful person, so having someone by my side who can remind me of things is great.”

What about Him? Mandy laughed, “He is too childish and sunny! Our relationship is like a puppy love, a first love.”

Him and Mandy grew a lot closer over the years. Many reports have indicated that because of their close relationship, Tavia has become jealous of Mandy. Him immediately explained, “Nothing like that ever happened, and it won’t happen. Mandy and I technically grew up together.”

TVB’s Most Improved Artists of 2012

In 2012, Him and Mandy appeared in four dramas together – L’Escargot <缺宅男女>, The Hippocratic Crush, Tiger Cubs <飛虎>, and Divas in Distress. Although the nomination list for 2012’s Most Improved Male and Female Artists are not out yet, it is guaranteed that both Him and Mandy will make it to the top 5 nominations.

Mandy is undoubtedly the strongest and most popular contender for the Most Improved Female Artist award, and she will likely be the one to bring the award home.

However, Him Law is faced with stronger competitors such as Oscar Leung (梁烈唯) and Edwin Siu (蕭正楠). Him is unsure if he will be the ultimate winner, but exclaimed that he has confidence. “When I first joined TVB, I never thought of winning any kind of award. But now, I really want to win one so I can give my family some assurance.”