Him Law is Busy Filming TVB Drama on His Third Anniversary 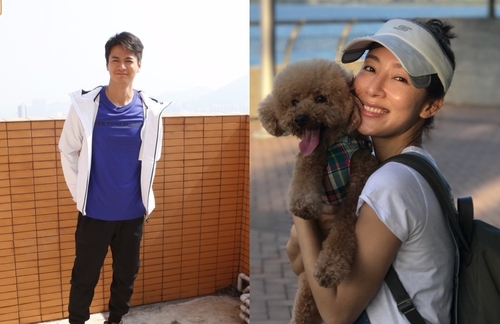 Recently, Him Law (羅仲謙) has been busy shooting TVB series Thorny Witness <木棘證人>. On his third wedding anniversary with wife Tavia Yeung (楊怡), the devoted actor still went to work since it’s the peak filming period. Although he had to wear a jacket under the blazing sun for the rooftop scene, he likes that Tavia can relax at home while he works hard.

He Plans to Make It up to Her

Since he’s been busy with work, Him said he did not prepare a gift or elaborate celebration, but Tavia would not mind. He explained, “We’re used to it. We usually gift each other small gifts randomly, so we don’t wait for it to be a special day. She only wants us to be healthy.”

However, he said he would make it up to his wife by taking her on a trip in November after filming completes. “It was very rushed when we went to the UK for our wedding, so we didn’t get to explore. I want to go back and experience that happiness again,” Him shared.

When reporters reached out to Tavia for a comment, she said Him didn’t tell her about the vacation, but she echoed her husband’s statements and said they weren’t doing anything special for their anniversary.

Tavia’s Heart Aches for Him

The actress added that her heart aches for Him. She expressed, “He doesn’t even have time to eat, so I rather he sleeps more during his free time. He doesn’t get enough sleep and he’s very tired.”

Even though he only sleeps four hours a day, Him said he doesn’t mind as long as Tavia does not have to work hard. “Since I’m working, my wife gets to enjoy herself. That is my biggest gift to her!” he joked.

On a more serious note, Him praised Tavia as really nice and considerate. “She helps me put on makeup every day, so I have more time to rest. I can get in an extra hour of sleep!”

Tavia admits she tries her best to put makeup on him, but he doesn’t need much.