The popular couple from “Come Home Love: Lo and Behold” didn’t always get along.

Paring down many layers of relationship between them as onscreen lovers and colleagues during filming, Mandy Lam (林淑敏) and Jack Hui (許家傑) have developed a peerless chemistry that made them great partners in reel life, one year since the series Come Home Love: Lo and Behold <愛．回家之開心速遞> brought them well-deserved fame.

At the 2018 Anniversary Awards, the pair was nominated for the “Most Popular Onscreen Partnership” award for their respective roles in Come Home Love: Lo and Behold, but lost to Edwin Siu (蕭正楠) and Raymond Cho (曹永廉) for Two Men in a Kitchen <兄弟大茶飯>. Mandy did win Best Supporting Actress though, and the 42-year-old actress was greatly appreciative that audiences have grown to love her iconic character.

Although Mandy is a great acting partner, Jack recalls the awkwardness during their initial collaboration,”There was a scene when you were drunk and I had to piggyback you. You said sorry and that it’s okay if we cheated using camera angles. But everyone knows I’m a strong guy so I said it’s okay, haha!” He also praised her professionalism, citing her giving in to co-actors’ and director’s onscreen demands without a single grudge.

Mandy recounts a scene during filming when their characters meet at the office entrance and Jack has to shelter her across the road. “The director said I had to (show) that I was in love and charmed by him, but I was not getting it. A cameraman whom I knew quite well then instructed me to imagine that (Jack) was him; so I remembered the feeling and did the takes!” 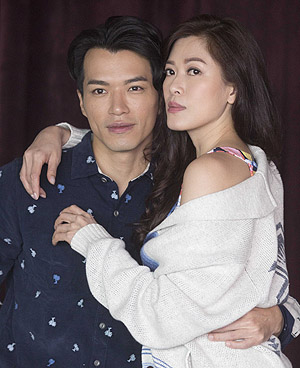 While the comedic timing in Come Home Love: Lo and Behold looks effortless on screen, Jack said that filming a short scene could take days to get it just right. Jack brought up an episode which was most memorable called “First Love: The Final Round” <初戀最終回>. Though they appeared for only half the episode, the filming took ten days. He said, “Mandy had to pay tribute to the classic street-running scene in A Moment of Romance <天若有情>. Her running scene took three days to film for the three-minute scene, while my motorbike scene took two days. We did every take seriously even though the eventual footage was just a few minutes. There was another fleeting three-second scene where my character waited on the balcony until nighttime, which took five hours to film.”

The slower to warm up of the two, Mandy is thankful to Jack for influencing her progress with his exacting standards. Recalling how she and Hoffman Cheng (鄭世豪) struggled with a Latin dance scene, she shares, “Jack had no scenes that day, but he especially came and took many hours to guide us. We were still fooling around, when he suddenly got very serious and said, ‘Listen to me.’ So Hoffman and I straightened up and paid full attention.”

From Courteous Co-workers to Candid Partners

Due to their different communication styles, Jack admits that he did have hard feelings at the beginning of their collaboration. But he is happy that they broke the ice and established a great partnership as “candid competitors” who are unafraid to speak their mind to help better the scene.

Agreeing, Mandy is grateful to Jack for following her lead even at times when she might be speaking in harsh tones, as she feels that this chemistry is what makes for a great performance onscreen.

Indeed, the viewers’ approval they have gained is proof of their flawless chemistry and hard work.