The 2018 TVB Anniversary Awards was held on December 16 with several surprise wins. Due to the popularity of Life on the Line <跳躍生命線>, Joe Ma (馬德鐘) finally won the Best Actor award after being nominated 16 times. Ali Lee (李佳芯), who starred in another audience favorite Who Wants a Baby <BB來了>, won Best Actress. Life on the Line was the big winner of the night, and won the Best Drama award.

Dicky Cheung‘s (張衛健) TVB comeback drama in 22 years, The Learning Curve of a Warlord <大帥哥> which has not completed its full broadcast yet, did not win a single award at the awards ceremony.

Acting for 27 years, Joe Ma was thrilled to clinch Best Actor. In his acceptance speech, the 50-year-old actor said, “I’m very happy to win this award for the first time! After tasting bitterness, now I understand what sweetness truly is. Thank you TVB, viewers who support me, and my media friends. Thanks to Catherine Tsang (曾勵珍)–without you, there wouldn’t be Life on the Line and [my character] Mak Choy Tin. I remember what you have told me; before I was young and naive; now I know. Thanks to Virginia Lok (樂易玲); you’ve supported me through the highs and lows. Thanks to Life on the Line producer Dave Fong (方駿釗), the script editor, the cast and crew. Everyone did a great job; that’s why we’re able to move the audience. I have to thank my family. I believe my father can see me in heaven. Thanks to my son for giving me a lot of happiness. Thanks to my wife for taking care of our home so well; it’s definitely not easy being an actor!”

Joining TVB in 2012, Ali Lee worked her way up from supporting to leading roles. The prolific actress can be seen in three dramas on average each year. Receiving gynecological surgery earlier and requiring additional rest, Ali had initially declined the role in Who Wants a Baby?  By agreeing to film, she risked having a prolapsed uterus. When the drama aired to favorable ratings, Ali was greatly comforted. Thanking Catherine Tsang and the TVB producers she has worked with in her acceptance speech, Ali said, “I want to say that I’m not a winner in the starting line. I don’t know what it means that the predecessors planted trees, and future generations benefit. I’m just a lump of rice and do my best in each role and everything. I only know that I can rely on myself to reach success. When you are very tired and want to give up, remember that you are not alone; there are many people who are silently walking down the same road.” 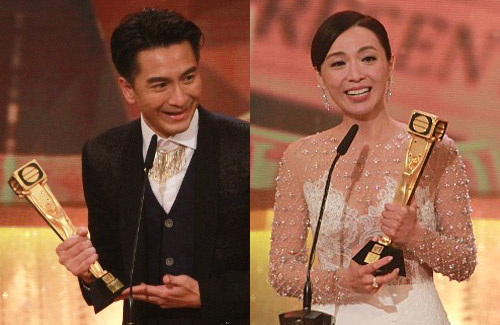 Nominated 11 times for Best Actor, Kenneth Ma (馬國明) once again won Most Popular Male Character instead for his performance in Deep in the Realm of Conscience <宮心計2深宮計>. The 44-year-old seemed surprised by his win. After overcoming his initial shock, Kenneth said, “There’s no need to hand me any tissues; I’m not a spokesperson and didn’t get money. I really don’t know why I got an award. I can only thank this drama and the people who love me, as well as TVB management. Tonight really was a surprise.”

In a tight race for Best Actress, Alice Chan (陳煒) instead won Most Popular Female Character for Deep in the Realm of Conscience. Crying during her acceptance award, Alice thanked producer Miu Siu Ching (梅小青), as well as the TVB producers she has worked with. 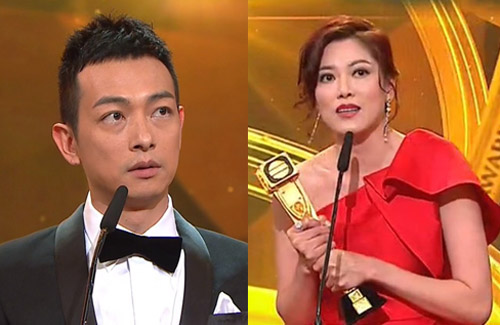 Oscar Leung (梁烈唯) won Best Supporting Actor for his performance in OMG, Your Honour <是咁的，法官閣下>. Oscar also seemed surprised by his win, “Several years ago, many things happened which were very challenging for me. I thought of giving up many times. Many thanks to my good friends for their support, and Virginia Lok and Sandy Yu (余詠珊) for giving me work when I needed it. I want to tell my wife, ‘I Love You,’ without you beside me to support and remind me, there’s no chance I would be on stage now. Thanks to my parents, my daughter, my older brother, and my great friends.”

A cancer survivor, Mandy Lam (林淑敏) was very emotional when accepting her Best Supporting Actress award. “Seven years ago when I was very ill, I thought of how useless I am. But Virginia Lok called me and told me not to worry and come back to work.” Mandy said her award belonged to the entire cast of Come Home Love: Lo and Behold <愛．回家之開心速遞>. 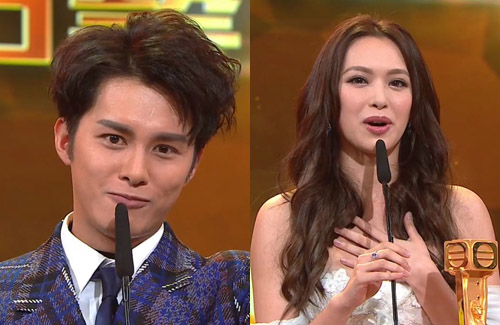 Matthew Ho (何廣沛) won Most Improved Actor for his performance Life on the Line. In the industry for two years, Crystal Fung (馮盈盈) was surprised to win Most Improved Actress and felt she did not deserve it. Talking with the press afterward, Crystal said, “It came too fast. I feel like I’m dreaming. Life is like a roller coaster with its big ups and downs.”