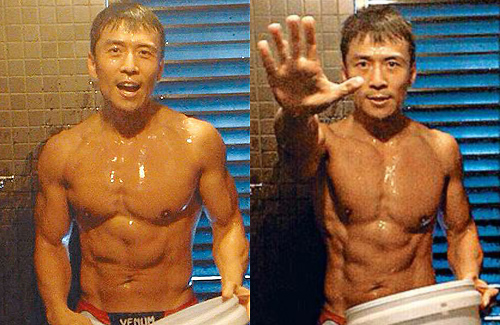 Returning to TVB in Heart and Greed <溏心風暴3>, Michael Tong (唐文龍) manages to capture the hearts of many even at the age of 48. Michael seems as if he has not aged a single day since his last TVB drama a decade ago. Behind his sculpted body is a disciplined fitness regimen.

In an episode of Heart and Greed where Sharon Chan (陳敏之) and Michael were seen kissing in the swimming pool, many fans noticed Michael’s super-toned physique. When asked about his secrets, Michael shockingly revealed that he can do 90 to 110 pushups consecutively. When he was younger and at his peak, Michael was able to do 130 to 140 pushups and 80 sit ups in a minute.

Michael said it is important to know that obtaining a fit body take a lots of time. It is  not something that is achieved overnight. He said, “I do kung fu, Thai boxing, and similar activities. For those activities, I only need to train for 30 minutes. I rarely go to the gym. Instead, I usually go the nearby playground and train there. For example, I do sprinting, rope swings, crab craws, pushups, monkey bars, and stair jumps. I have my own equipment such as knives – they enable me to tighten my muscles. In the summer, I would swim. I usually exercise when I’m not working and I would rest during the weekends. If not, it would be very easy to tire myself out and get injured.”

Michael is not one to diet, but will avoid eating foods that are too starchy or high in carbs. “I don’t eat after 8 or 9 p.m.. I would only eat if it’s early. If I eat at night, I will need to compensate by working out afterwards. Sometimes when I get home at 4 a.m. due to late night work, I would eat a bun. Since it’s high in calories, I would do 20 minutes of exercise before showering and going to bed. You don’t need to be scared of gaining weight that way.”

Besides showing off his body in Heart and Greed, Michael displayed his ability to portray the antagonist, Nic. Grateful to have been given the opportunity to work with so many talented people, Michael specifically thanked producer Lau Ka Ho (劉家豪) for inviting him to join the cast. Having spent the early years of his career at TVB, Michael was very excited to appear in another TVB drama and allow younger viewers to get to know him. 4 comments to How Michael Tong Maintains His Killer Body