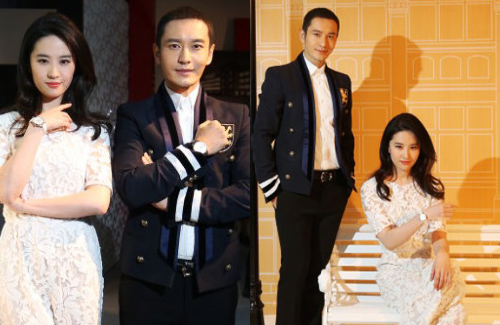 Nine years after they filmed the mainland Chinese drama, Return of the Condor Heroes <神鵰俠侶> together, actor Huang Xiaoming (黃曉明) and actress Crystal Liu (劉亦菲) were reunited at a Beijing event, where they shared about their high-profile love lives.

For six years, Huang Xiaoming has been a spokesperson for the Swiss watch brand Tissot. Today, the brand announced that Crystal Liu, who starred opposite Xiaoming in Return of the Condor Heroes, would be joining as Tissot’s newest spokesperson.

“Being here with Crystal Liu makes it seem like we have returned to the time we filmed Return of the Condor Heroes,” remarked Xiaoming. “But now, the two of us have gotten older; I have a family now, she has matured, and our careers are prospering more and more. Time can bring everything, but it can also take everything away and put everything in reverse. Thus, time is very important.”

Keeping the focus on the importance of time, Xiaoming and Crystal shared important moments in their careers. For Xiaoming, it was when he filmed the movie American Dreams in China <中國合伙人>, since it allowed him to experience an inner change and netted him many acting awards as well. Crystal revealed that a turning point in her career was getting to work with many veteran actors in The Forbidden Kingdom <功夫之王>, as that was the first time she began to understand acting.

Romantic Involvement Inside the Industry

Both Xiaoming and Crystal are romantically linked to people in the entertainment industry, and their love lives have frequently drawn the attention of the media, especially following Xiaoming and Angelababy’s (楊穎) extravagant wedding earlier this month. Crystal readily admitted that her boyfriend, Korean actor Song Seung Heon, is very important to her.

“We usually have to appear like bright and beautiful stars in front of audiences,” said Crystal. “But in relationships, we are allowed to return to the state of being a normal person and enjoy our lives that way.”

Xiaoming was quick to agree, saying, “This is especially true when your partner is also in the entertainment industry, because they are even more able to sympathize with your problems and give you more support.”