With ongoing rumors of marital discord between Huang Xiaoming (黃曉明) and Angelababy (楊穎), more gossip flared when the 43-year-old actor bumped into his ex-girlfriend Qin Lan (秦嵐) at the “2020 Scream Night” hosted by streaming platform iQiyi on January 15.

Angelababy was already discontent when her old romantic history with Huang Xiaoming was dug up. The actor withdrew from hosting Sisters Who Make Waves 2 <乘風破浪的姐姐> when his ex-girlfriend Li Feier (李菲兒) was invited to star in the reality show.  This sparked talked that Angelababy was the third party leading to Huang Xiaoming’s breakup with Feier, which Angelababy took to social media to clarify that she did not ruin their relationship. 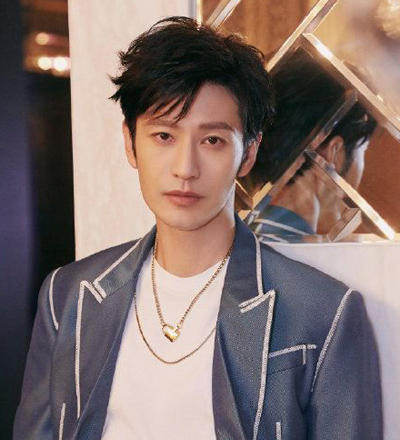 Just as talk over Li Feier was subsiding, Huang Xiaoming ran into another ex-girlfriend at the Scream Night event. A star-studded event of celebrity performances, iQiyi also provided a livestream of the event’s backstage, during which a spirited Qin Lan played mahjong for three consecutive hours.

Appearing backstage later in the evening, Huang Xiaoming looks a tad tired in his blue suit, due to losing too much weight for his new film. As he walked to the mahjong table for a look, he did not avoid Qin Lan, and the two ex-lovers politely greeted each other.

Coincidentally, Angelababy’s ex-boyfriend William Chan (陳偉霆) was also present at the same event. The two had dated for five years before calling it quits in 2010. While William took the initiative to greet Qin Lan and even joined in the mahjong game at one point, it was uncertain if he had any interactions with Huang Xiaoming that night.

In online discussions, netizens traded gossip and wondered if it was a mere chance encounter or if the production unit had intentionally brought the celebrities’ exes together, adding, “It was truly ‘Scream Night’” while other netizens observed that “It is apparent that Huang Xiaoming and Qin Lan did not harbor any bad feelings after breaking up.” They added that the long 10-year time lapse since their dating days might also have erased any feelings of embarrassment.

Huang Xiaoming Pulls Out From “Sisters Who Make Waves” Season 2