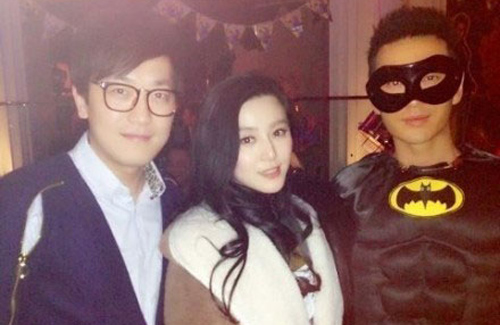 Huang Xiaoming (黄晓明) has been celebrating his 35th birthday with various friends over the last week. From lip-locking Shawn Yue (余文乐), meeting girlfriend, Angelababy, for a barbecue dinner, to holding a Hollywood-themed birthday party, Xiaoming basked in all the fun.

Since the friends share the same birthday of November 13, Xiaoming and Shawn were presented with birthday cakes at a promotional event for The Guillotines earlier this week. Irresistibly, Xiaoming and Shawn kissed each other lightly on the lips, and smiled widely after the exchange.

On November 10, Xiaoming was spotted with girlfriend, Angelababy, sharing a leisurely meal at a barbecue restaurant. The small restaurant was simplistic and known for its grilled meats, providing only a few tables for its diners. Xiaoming and Angelababy ignored others’ stares and ate the food ravenously and enjoyed each other’s company.

When the couple stepped out of the restaurant, they laughed loudly. Instead of returning to Xiaoming’s house, they entered a nearby hotel, perhaps to enjoy the pleasures of a “winter staycation”.

On November 12, Xiaoming morphed into Batman for the day. At his Hollywood-themed birthday party, Xiaoming’s face was plastered on a James Bond prop, a Spiderman birthday cake, and more Hollywood movie poster spoofs.

Although Xiaoming’s earlier crush, Vicki Zhao was unable to attend his birthday bash, she sent him heartfelt greetings via Weibo, “Today is your birthday! You are a lucky person! Because you are kind and honest! Hope you will always stay the same way as we know you and do not compromise yourself for a living! Retain the same happy and carefree life as you initially did! Jia you!”

9 comments to Huang Xiaoming Morphs into Batman on 35th Birthday