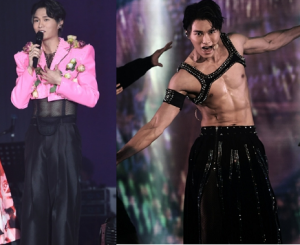 Fans of the 31-year-old had specially curated a balloon set-up prior to the event, in order to wish their idol success.

Starting off the concert in a mystical black outfit designed by Hong Kong stylist Tomas Chan, Hubert sang “The Day After Today” (今天之後), and also delivered other catchy songs, including “I Was Here”, the theme song for popular drama The Exorcist’s Meter <降魔的>. Concert guest and winner of talent show Star Academy <聲夢傳奇>, 19-year-old Gigi Yan (炎明熹) also charmed audiences by co-singing a new single with Hubert as he played on the piano, while singer Joyce Cheng (鄭欣宜) worked a duet with him, and the two shared heart-warming and funny snippets of their long-time friendship.

Fans had earlier expressed they wished to see “more” of Hubert during the concert, and the singer and actor did not disappoint, rewarding fans by showing off the result of his diligent training in well-toned six-pack abs, much to the audience’s excitement! Later, he could not control his tears and was encouraged by fans to complete the concert theme song “Thank you for your support” .