After starring as Zhou Zhiruo in 2019’s Heavenly Sword and Dragon Slaying Sabre <倚天屠龍記>, Chinese actress Zhu Xudan (祝緒丹) had her breakout role. Despite this, the 28-year-old actress has not followed up with any notable works on the same level of success, and is even rumored to be not highly favored by her management company, Jay Walk Studio. 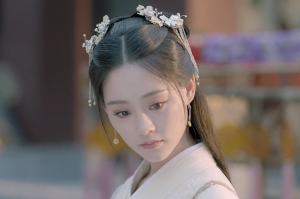 Zhu Xudan, however, seems to have fallen to the wayside. Though Miss The Dragon <遇龙> is currently airing, she only filmed one drama for four months 2020 and has not filmed any projects in 2021 so far. Most of her free time is spent resting at home.

Seemingly dissatisfied with the lack of work, Zhu Xudan posted a cryptic message on Weibo, “Just destroy it.” Though she removed the post shortly after, the ambiguous message led to heated discussions among netizens. One of the more popular theories is that Zhu Xudan was voicing her discontent with the company and the way they are handling her career.

In contrast, her colleague Dilraba has abundant work. After 2020’s Eternal Love of Dream <三生三世枕上書> and Love Designer <幸福，觸手可及>,  Diliraba continues her winning streak with the broadcast of The Long Ballad <長歌行> and You Are My Glory <你是我的榮耀> in 2021. It seems as though Jay Walk immensely favors Dilraba over Zhu Xudan, causing displeasure from the latter’s fans.

Seeing the heated discussion among fans following her deleted post, Zhu Xudan finally responded, “Don’t make random guesses. Everyone has moments when they are feeling down.” Though intended to dispel the rumors, Zhu Xudan’s response instead triggered even more debate over the reason behind her discontent.