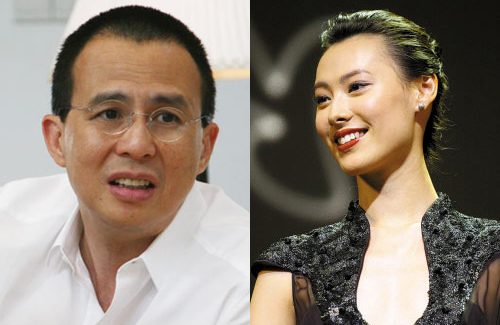 When Isabella Leong (梁洛施 ) left the entertainment industry abruptly for billionaire, Richard Li (李澤楷), her move shocked the industry. After all, she was a rising star having joined the industry at the tender age of sixteen. Richard arranged for Isabella to move abroad and even enrolled her in Stanford University to take English classes. Within three years of dating Richard, Isabella gave birth to three sons.

Isabella shocked the public again when the duo announced their separation shortly after the birth of their third son, and the question on everyone’s mind was: “Will Isabella return to the entertainment industry?” While the 24-year-old expressed that she has no intention of returning, she is still a target for paparazzi who wants to capture her every move.

Recently, Isabella and a handsome young man were spotted enjoying oysters at Rodney’s Oyster House in Toronto. According to sources, they seemed extremely at ease with one another. They also pointed out that Isabella’s skin is flawless with a hint of pink and she is extremely beautiful in person.  Upon getting a closer look at her male friend’s face, his looks bore close resemblance to the man spotted vacationing in Paris and Hong Kong with her, leading to speculations that they are dating.

Isabella’s representative addressed the rumors, “That is her personal life which I cannot comment on. She is enjoying her carefree life in Canada and focusing on raising her children, so she has no plans to return to Hong Kong.”

Isabella is not the only one enjoying her newfound single life. It turns out that Richard Li has also been back in the dating scene only three months after their split last year. He was seen with 26-year-old Kirsten Leung (梁雯影 ) in Singapore in May, 27-year-old Ella Leung (梁芳 ) in Hong Kong, and a woman in Beijing whose identity remains unknown.