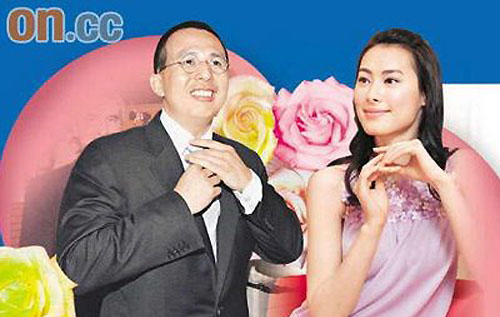 In April 2009, twenty-one year-old, Isabella Leong Lok Chi gave birth to tycoon, Richard Li’s son, Li Cheung Chi, in the USA. Two months after the baby was born, the couple distributed photos to the media, shocking the entire Hong Kong. Although Isabella and Richard did not officially get married yet, the couple took bridal photos.

Within a year, Isabella is once again pregnant. This time, she will be having boy-girl twins in October! The media speculate that due to Isabella’s second time pregnancy, this may increase her chances of marrying into the wealthy Li household.

When Isabella was two months pregnant, she attended Sammi Cheng Sau Man’s concert. Allegedly, Isabella was unaware that she was pregnant at the time. Fortunately, there was no chaos among the attending audience that night.

Isabella was living with Richard Li in his $20 million (HKD) Shek O mountain-top mansion. Since then, Earlier, Isabella went to the USA to quietly rest while anticipating her birth. Richard Li intends to have Isabella deliver the boy-girl twins in Hong Kong, so that grandfather, Li Ka Shing, can see the babies immediately after birth.

Earlier, reporters asked Li Ka Shing about Isabella’s pregnancy. “Let’s not talk about personal matters.” But it was apparent that Li Ka Shing was happy about being a grandfather again.

Above: Richard Li and Isabella Leong with their first born son

Jayne: Isabella and Richard Li obviously want to get married (thus the bridal photos)…so are they just waiting for Li Ka Shing to say yes? Whether the senior Mr. Li says yes or not, Isabella and the children probably already have a chunk of the Li’s mega-billions.