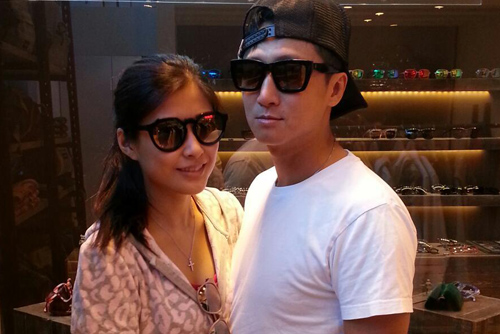 In late June 2012, Timmy Hung (洪天明) and Janet Chow (周家蔚) attended an event for a nightclub. The newlyweds were in high spirits, and the chubbier Janet also admitted to the press that she gained over 10 pounds! Could Janet be pregnant?

Janet expressed that she is not afraid of getting fat, and laughed, “I should eat more! It’ll make for a safer pregnancy!” Asked if she notified Timmy’s father, Sammo Hung (洪金寶) yet, Janet replied, “We will let him know, but that is Timmy’s responsibility.”

When asked if Janet was already two months pregnant, Timmy said, “I’m waiting for my wife’s report! I don’t want to talk too much nonsense. I will let everyone know if there’s new information! Right now, she needs to see the doctor!”

Timmy, whose birthday was on July 1st, also expressed that he would not want to throw a birthday party with Angela Tong (湯盈盈) again, whose birthday was the day before. He said, “I hope Chin Ka Lok (錢嘉樂) and her get married and have kids soon! I heard that she really wants to!”

7 comments to Janet Chow is Pregnant?