All You Need to Know About Charmaine Sheh and Her Squad

The entertainment industry has its fair share of cliques, and when it comes to Hong Kong’s most famous celebrity squads, there are no other than Myolie Wu’s (胡杏兒) Nonsense Club and Linda Chung’s (鍾嘉欣) Virgin Gang. But these current and former TVB stars aren’t the only gangs to look out for. TV Queen Charmaine Sheh (佘詩曼) has her own squad too, and they’re definitely no less important.

Affectionately known as the “Seven Devil Girls,” this gang comprises of Charmaine, Annie Man (文頌嫻), Sherming Yiu (姚樂怡), Angela Tong (湯盈盈), Margaret Chung (鍾麗淇), Toby Leung (梁靖琪), and Janet Chow (周家蔚). Charmaine may be the most famous of the seven sisters, but all the other girls had found fame in the early 2000’s through TVB dramas. For fans who have been diligently catching up to TVB news since the early 2000’s, these girls will definitely sound familiar.

The first of the seven sisters is Charmaine herself, undoubtedly the most popular of the seven. Charmaine made her debut in television after winning second runner-up at the 1997 Miss Hong Kong Pageant and appeared in her first TVB television drama the following year. The odds were not in her favor when she was cast as the lead actress in TVB’s 1999 remake of The Flying Fox of Snowy Mountain <雪山飛狐>, but she eventually reaped the fruits of her labor after starring in 2000’s Return of the Cuckoo <十月初五的月光>, which skyrocketed her fame. 2004’s War and Beauty <金枝慾孽> furthered her popularity, and the uber-success of 2014’s Line Walker <使徒行者> confirmed that Charmaine is here to stay for the long run. 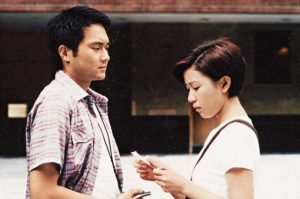 Perhaps her career was the sacrifice, but Charmaine’s love life suffered. During the filming of Return of the Cuckoo, Charmaine was rumored to have fallen in love with her costar Julian Chilam Cheung (張智霖), upsetting Chilam’s then-girlfriend and now-wife, Anita Yuen (袁詠議). Anita even went on set to visit Chilam, and that got things pretty awkward between Chilam and Charmaine. The gossip magazines are still talking about their rumored feelings for each other 18 years later.

Charmaine’s only confirmed relationships since debut was with Benny Chan (陳浩民) and Kevin Cheng (鄭嘉穎). The former she dated in the early 2000’s, and the later she dated after filming Forensic Heroes II <法證先鋒> together. Now, Benny is a father of four children, and Kevin is dating 2013 Miss Hong Kong Grace Chan (陳凱琳). 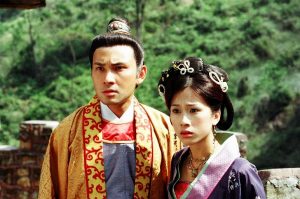 The next of seven sisters is Annie Man, who was one of the hottest rising television stars of the late 90’s. Annie made her debut at 16 years old with ATV, TVB’s then-rival station. She was one of the hottest actresses to come out of ATV at the time, and her transfer to TVB in the early 2000’s was initially successful. Annie has played a handful of iconic characters during her early years at TVB, including Juk Hiu-lin in 2000’s The Legendary Four Aces <金裝四大才子> and Dun Ju in 2001’s Colourful Life <錦繡良緣>.

However, her decision to not renew her TVB contract eventually caused Annie to slowly fade away from the acting scene. In 2012, Annie married businessman Jason Lee (李梓慎), and the couple has one daughter, Jaime. Annie was brought back to mainstream attention in 2016 when a debt collector made huge posters targeting her husband, but Annie quickly denied the news of her husband being in debt. Charmaine was supportive of her friend, but nonetheless added that she would always be around to support Annie and her family if they ever needed financial help. 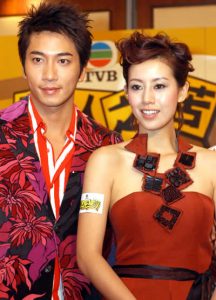 Annie wasn’t the only sister to have married a wealthy businessman. Former TVB actress Toby Leung, the daughter of former TVB executive Tommy Leung (梁家樹), had a flash marriage with businessman Aaron Wong (黃敏豪), in 2011, but their marriage only lasted about a year. Toby’s friendly and social personality also caused a lot of problems for the stars. The former Girls’ Dormitory (女生宿舍) memory had dating rumors with Ron Ng (吳卓羲), and it was said at the time that their close relationship was the reason behind her divorce with Aaron.

This was all denied, of course. Toby and Ron are still good friends, and Toby is now dating Jon Sze, who is seven to eight years younger.

Margaret could possibly be the least well-known of the seven sisters, but her courage and love for her family precede all. The Canadian-born former TVB actress, who made her debut in 1997, may have had a short-lived acting career, but her appearance in TVB dramas such as Detective Investigation Files <刑事偵緝檔案> and Untraceable Evidence <鑑證實錄> definitely pushed Margaret as one of the defining TVB supporting actresses of the late 90’s. 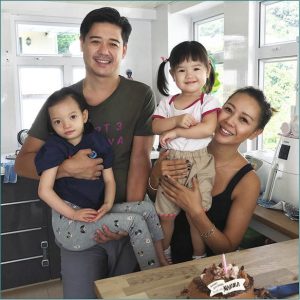 The actress dated Joey Leung (梁榮忠) for eight years, but the couple ultimately split in 2006, after Joey cheated on her with Queenie Chu (朱慧敏). In 2010, Margaret married her husband Nardone Ruggero, and the couple has two daughters. Their first daughter, Isabella, suffers from Wolf-Hirschhorn syndrome, a chromosomal disorder that gives the child a distinct round face and intellectual disability. At the time of Isabella’s birth, her doctor predicted that she would not survive past two years—but through Margaret’s dedication to her family and strong love, Isabella has overcome all barriers to her life, and is now eight years old. In 2015, Margaret gave birth to her second child, a healthy baby girl named Michela. 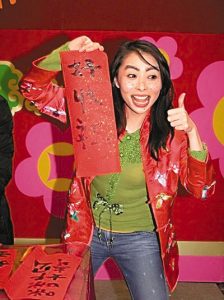 Angela and Janet share two things in common—first, their husbands are martial arts stars. Second, both are former beauty queen competitors. Angela made her debut as a contestant in the 1995 Miss Chinese International Pageant, and although she failed to win a crown, it was a catalyst in her career. Angela worked her way up from the bottom, and in 1999, she gained the viewers’ attention as Sophia in Feminine Masculinity <先生貴姓>. In 2005, Angela won Best Supporting Actress for her performance in Life Made Simple <阿旺新傳>. Currently, Angela is married to martial arts and variety star Chin Ka-lok (錢嘉樂) since 2012, and the couple has three daughters.

Unlike her peers, Janet never had a body of work that pushed her beyond her Miss Hong Kong stardom. Janet, who won first runner-up at the 2006 Miss Hong Kong Pageant, is now perhaps best known for being the wife of prolific action star Timmy Hung (洪天明), with whom she has two sons with. 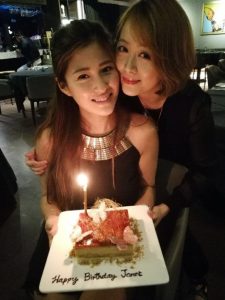 Sherming had a very “safe” career—she never reached fadan status like a lot of her friends, but her performance as Shek Tai in the famous, long-running TVB sitcom Virtues of Harmony <皆大歡喜> did put her in the market as one of the more well-known faces in early 2000’s Hong Kong television. Sherming has been married since 2012, and she has one daughter, Gaibe.