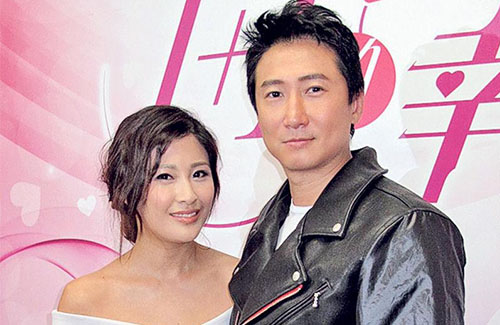 Last week, Timmy Hung (洪天明) was photographed at a nightclub in Shanghai, where he hugged a mysterious woman and held hands with her as they proceeded to walk into the elevator of his hotel. Timmy has admitted to the events of that night, and though his wife Janet Chow (周家蔚) reacted sadly to the news, their marriage and relationship has not been affected. The actor, however, chose not to respond to cheating rumors.

A few days ago, the Hong Kong actor, who is represented by the Mainland Chinese agency Milkyway Hairun, released a formal statement about the incident that happened last week. Timmy’s manager blamed the incident on alcohol, as Timmy was very intoxicated when he brought the woman back to his hotel. The woman hugged Timmy and they did hold hands briefly, but nothing more happened that night. Timmy has also explained the situation to his agency, and promised that he will be more careful in the future, promising to be a more responsible drinker.

There are readers who doubt this story, however. In the clip released by paparazzi, Timmy did not carry a drunken demeanor when he held the woman’s hand. Timmy also drove his car that night.

In regards to these discrepancies, Timmy said, “This was taken way out of proportion, and not as bad as you all think it is. It was all a misunderstanding. A real misunderstanding. I did not betray my wife. After saying this, I hope everyone will leave my family alone.”

His wife, Janet, said, “It was just a misunderstanding.”

19 comments to Timmy Hung Responds to Cheating Rumors: “I Didn’t Betray My Wife”