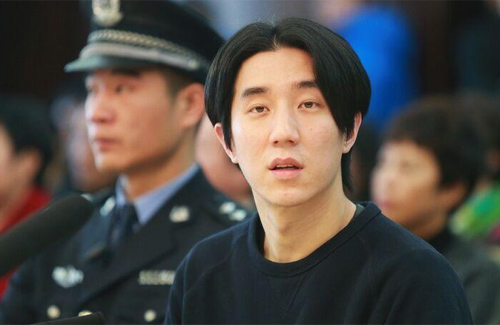 Arrested in August by Mainland Chinese authorities for marijuana possession, Jaycee Chan’s (房祖名) case was heard in court in Beijing on January 9. Jaycee admitted using marijuana with friends at his Beijing home four times. Apologizing for his drug use, Jaycee received a six-month prison sentence and was fined 2,000 RMB.

In the court hearing, Jaycee stated, “I broke the law, so I should be punished. When I am released, I will not repeat this offense, otherwise I will disappoint my family and friends again. Although I am duly punished, it does not necessarily mean that I receive forgiveness. I hope that in the future, I will receive understanding through my actions.”

On the day of his arrest by Beijing authorities, Jaycee recounted that he and his personal assistant Sun Le (孫落), as well as Kai Ko (柯震東) were at a foot massage parlor. After interrogated by authorities for four hours, Jaycee admitted to marijuana use and accompanied the police in searching his home. Over 100 grams of marijuana were seized from Jaycee’s home in Beijing.

Two defense lawyers appeared in court, but Jaycee’s parents, Jackie Chan (成龍) and Joan Lin (林鳳嬌), did not attend the hearing. Due to the high profile case, the couple did not wish to add to the media frenzy inside the courtroom. Jackie arrived in Beijing earlier and had already met with Jaycee’s lawyers. Joan has been writing letters to Jaycee every day and will give them to him upon his release.

As Jaycee has been jailed since August, this would be set off against his six-month prison sentence. Jaycee will be released on February 14, and will be able to spend Lunar New Year with his family.