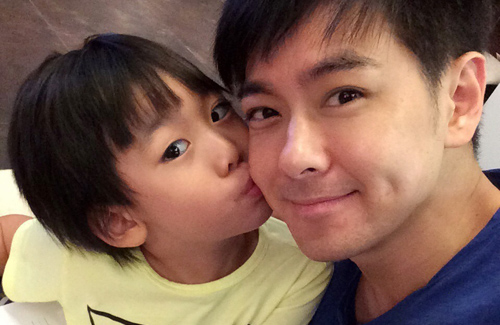 Jimmy Lin (林志穎) found his image to be at stake when he was faced with the pressure to either announce the birth of his son or keep it a secret. “My [career] situation then was not as bright as it is now. I thought about how news of my engagement and the birth of my son could anger and upset many of my fans,” said Jimmy in an interview.

Taking fans by storm when he burst upon the Taiwanese music scene when he was only 17 years old, Jimmy saw his career peak, then dive after his mandatory military service was completed. He has always been careful in handling his personal love life, even denying that he was dating former model Kelly Chen (陳若儀) for fear of fan backlash and disapproval. He only admitted that he was involved with Kelly for five years after their son, Kimi, was born in 2009.

However, the only way to guarantee that Kim has a healthy childhood and a bright future is for Jimmy to make his announcement.“I want my son to happily grow. He cannot stand behind my back forever. I am so happy that he is receiving so much love from everyone now.”

Jimmy and his son Kimi became household names in China with their appearances in the popular Chinese reality television series Where Are We Going, Dad? <爸爸去哪兒>. Jimmy’s eyes would light up at the mention of Kimi, who is currently four years old. Jimmy said, “He’s beginning to get a little rebellious. When I tell him to go left, he will always go right.”

With the nickname “Little Whirlwind”, Jimmy was once one of Asia’s most popular young idols in the nineties. On the biggest changes he went through from being Little Whirlwind to Kimi’s father, Jimmy said, “I have a lot more drive now. My sense of responsibility has gotten stronger, and I’ve become more of a perfectionist. My mindset changed.”

Jimmy is currently promoting the release of his new book, My Patience with Time <我對時間有耐心>.