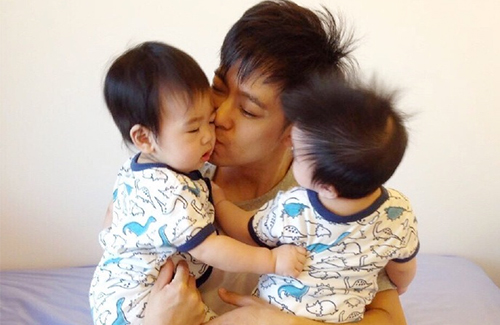 In December, 41-year-old Jimmy Lin (林志穎) and his wife Kelly Chen (陳若儀) welcomed their twin boys Jenson and Kyson. Jimmy always keeps his fans updated about his adorable little boys on social media, and Jimmy’s cute posts are always something fans can look forward to read at the end of the day. Now that the twins are 8 months old, the fans can now see just how similar Jenson and Kyson are to their dad!

Fans pointed out that Kyson, the younger of the two, extremely resembles Jimmy. Kyson has a habit of closing his eyes when he smiles, which is something Jimmy does as well. Jenson, on the other hand, resembles Jimmy’s older son, 6-year-old Kimi. Fans also said Jenson seems to share more facial characteristics with his mother.

“The three brothers can form a new boy band in the future!” a fan commented. Another said, “As the old saying says: Sons cannot be stolen. They look exactly like their father!”