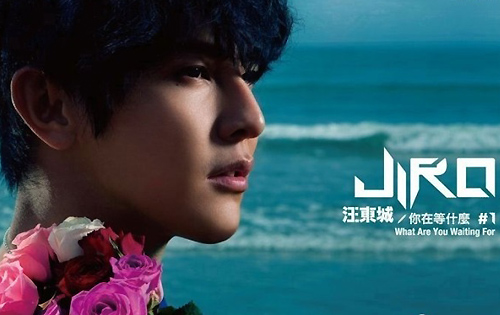 Fahrenheit (飛輪海) member, Jiro Wang (汪東城) traveled to Beijing to attend the mainland Chinese launch party of his debut solo album, What Are You Waiting For <你在等什麼>, on September 17. Most of the tracks on the album have a heavy rock essence, which is altogether very different from the pop dance genre heard in past Fahrenheit albums.

Jiro explained, “When I was still a student, I formed a band with my friends. I’ve always liked rock, and although I was in charge of the rap portion of Fahrenheit’s music, my most favorite genre is still rock.”

The 31-year-old singer-actor previously revealed on his Weibo that his favorite rock singer is Wang Feng (汪峰) from mainland China, and his favorite single by Wang Feng is In Spring <春天里>. “I met Teacher Wang Feng at many concerts, but most of the time it was me standing by the sidelines and watching him. I really want his signature!” Jiro hopes to be able to cover a song by Wang Feng in the future, but when Jiro was asked to sing a few lines from In Spring, he shook his head and said, “Let me get some practice first!”

At the press conference, Jiro performed the album’s self-titled single, What Are You Waiting For and the acoustic ballad, I Should Love You <我應該去愛你>. His favorite single in the album is Feel Me which is Jiro’s own compositional work.

The premiere of the music video for Jiro’s second promotional single, Like You <像你> was launched at the press conference. The lyrics, which were written by renowned Taiwanese lyricist, Yao Ruo Long (姚若龍), were inspired by Jiro’s late father. Jiro quietly said, “If I were to become a father in the future, I hope I will be like him–to be a father with just as much responsibility and bravery.”

Jiro’s father died at a young age, and Jiro grew up in a single household family with his mother. Jiro said his mother’s only wish was to see him getting married soon. Jiro said, “My family is very traditional. My mother always wanted me to get married and have kids. I will take her consideration into account.”

Jiro: “Fahrenheit is Not in Discord”

Since 2010, the four members of Fahrenheit have established their own separate careers. Wu Chun (吳尊) announced his official departure from the group in 2011, expressing his desire to focus on his film acting career. Aaron Yan (炎亞綸) has successfully established a solo career after the multi-platinum release of his debut solo album, The Next Me <下一個炎亞綸>, in March 2011. Calvin Chen (辰亦儒) has also built up his reputation as a popular variety and live show host.

Questions regarding Fahrenheit’s current brotherhood would consistently be brought up when the members were interviewed individually. When the question was asked at the press conference, Jiro looked annoyed, and stressed once again that he is still very close with his members, “The technology nowadays is very convenient. We will always text each other. I really don’t like it when the media has to guess our relationship.  I don’t like to be misunderstood.”

“What Are You Waiting For?” Watch Jiro’s MV!

TAGS: Fahrenheit, Jiro Wang, What Are You Waiting For