New time-traveling drama The Crossing Hero <超級大英雄> will be airing on March 23. To promote his drama, Jiro Wang (汪東城)  spoke about his first time as a producer, his acting career and love life. He also addressed the plastic surgery rumors that have frequently headlined gossip reports.

The Crossing Hero depicts a guardsman from the Ming Dynasty who, in the pursuit of a lost national treasure, inadvertently time-travels to the modern era. He then loses his memory and lives his life under a new identity as a private detective.

With a background in art and being a self-confessed comic book fanatic, Jiro admitted that he had extremely high expectations for the visual quality of the production. Regarding his own character’s look, Jiro said, “I was never pleased with any of the looks I was given for my past drama roles. This time, I was determined to get it right.”

Jiro then commented on the overall visual effects of the production, “To achieve the quality that I wanted, each scene cost several hundred thousand dollars, including money spent on props which would be dismantled after a few months. The high cost is heartbreaking but because this was my first time as a producer, I really wanted to do it well. To make up for the high production costs, I decided to not take a salary for my acting. I’ll just be happy if the drama series can break even.”

On His Acting Career

From It Started with a Kiss <惡作劇之吻> to the KO One franchise <終極一班>, Jiro has not been able to break out of idol dramas and has consistently been typecast as a pretty boy in his career. He lamented, “I really want to act in a fantasy drama, or a period drama such as the Chinese Paladin series <仙劍奇俠傳>. But many remarked that my looks are too contemporary and not very suitable for a period role. My dream role is actually Monkey God – not the Monkey God featured in the classic Chinese novel–but the one in the comic book series.”

On His Love Life

Jiro’s ex-bandmate Wu Chun (吳尊) has already become a father of two while Jiro is still single. Jiro’s mother was naturally eager for the 33-year-old to get married and has been nagging him almost “three times a day”.

Understanding his mother’s sentiments, Jiro shared the qualities of his ideal partner, “First, she must be filial to her parents. Second, my mom must like her. Finally, she must be able to cook and we must be able to get along with each other. Actually, a lot of this depends on fate.” Jiro then added that when he has a girlfriend, he would make it public and would not hide the relationship.

Due to the disparity between his looks in his early career versus his appearance now, Jiro has been plagued with plastic surgery rumors. Jiro’s response to these rumours was very measured. He said placidly, “Being suspected of having gone under the knife is actually a compliment! This means that people think I have become much better looking than when I first started out. I would be much more upset if the rumors were about how ugly I have become.” 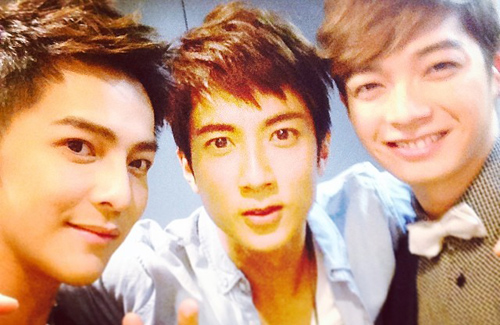