Joel Chan Wants to Have a Daughter 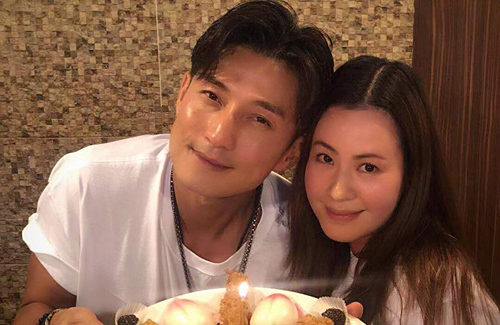 While he once thought himself not cut out to be a father, the 42-year-old actor changed his mind after seeing celebrity pals gain joy from fatherhood.

Starring Joel Chan (陳山聰) in his first male lead role, recently airing Barrack O Karma <金宵大廈> has won praise from viewers for its tight pace and unexpected twists. With his career progressing smoothly, Joel is also planning to tie the knot with his girlfriend of five years this November. A divorcee, the 43-year-old actor is thankful for his previous experiences and hopes to start a family soon.

To rebuild his acting career, he rejoined TVB and took on small roles; and in his personal capacity also got to know his current wife Apple. Both of these developments helped him return to normalcy again. Reflecting on his past, Joel said, “Every stage of life is worth reminiscing, and growing through. I am thankful for the experiences. Walking steadily step by step now, everyone has seen the change in Joel in recent years career-wise.”

Aware that he must never do wrong again, Joel believes that the future will only be better as he has learned the importance of protecting a relationship that was hard to come by: He said, “I hope to spend each day with my wife happily. That will be sufficient.”

Thanking Apple for her emotional and practical support over the past five years, he said gratefully, “No matter what time I finish work, she has never blamed me for not having time for her. Every year on her birthday I can’t celebrate with her, as she shares the same birthday as TVB, so I would only go back to cut her birthday cake after finishing my show.”

Although everyone knows that Joel loves fanciful style, he shared that his wedding would be a very simple affair. “Both of us wants to keep it simple with a ceremony in Hong Kong. Because I’ve been busy filming Running with Big Steps <大步走>, I only took two days leave to get married, put our names down on the certificate, and celebrate with a dinner. That’s all. At first we didn’t even want a celebration but just a meal with our families, but I want my good friends to have some fun and take some photos as a keepsake. All the guests are my best friends and it will be a simple party.”

Satisfied just to have people who love him by his side, Joel’s recent birthday was also no-frills yet heartwarming. He celebrated with a dinner with his girlfriend and sister-in-law, making his birthday wish with a small cake.

When asked about his marriage proposal, Joel shared that he had done none of the extravagant romantic tricks like proposing on one knee or preparing fireworks. On his girlfriend’s previous birthday, they had dined out and returned home. While Apple was curious that he had not prepared a gift during dinner, Joel whipped out a ring after they got back home. “All the while we had marriage plans. I mentioned that the time is about right to get the official registration and tie the knot. She said okay; it was just that. I’ve always felt that I should give her a proper status, plus I want to have kids too. We can start ‘working hard’ after I’m done with Running with Big Steps!” said the star when prompted on baby-making plans.

While Joel has never felt that he was the parenting type, he had a change of mindset after seeing his friends enter fatherhood. “I didn’t think I’d be any good as a father. Both of us enjoy our freedom, but with friends like Derek Kok (郭政鴻), Lai Lok Yi (黎諾懿) and Max Cheung (張達倫) becoming fathers, I see how happy they are.  Playing with my niece also made me feel that I am ready to be a father. I had started thinking about whether I should leave something on this earth during my lifetime. It’s good for the Chan family too!”

Leaving things up to fate, Joel has not planned how many children he wants, but hopes to have a daughter if he could choose, as “daughters would stick to dad more”.