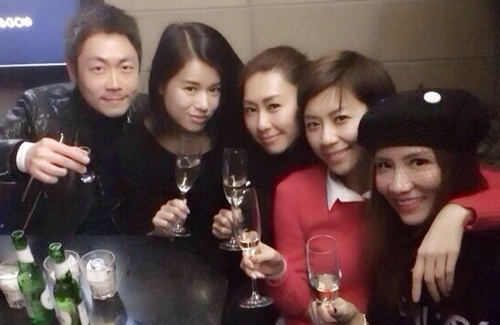 Myolie Wu (胡杏兒) and Johnson Lee (李思捷) fooled the fans and the media with an early April Fool’s joke this week when the pair were on a vacation to South Korea. Photos of Myolie and Johnson holding hands at the airport were circulated online and Myolie uploaded a photo of herself hugging a man who resembled Johnson, implying that she and Johnson have begun dating. Twelve hours after the reveal, Myolie admitted to fans that it was just a prank, upsetting many fans.

Realizing that she may have taken the joke a bit too far, Myolie immediately apologized to her fans. “I promise I won’t lie to everyone again!” she wrote on her Weibo blog.

Returning to Hong Kong with Johnson and Mandy Wong (黃智雯) a few days ago, the TVB stars held a brief interview with the press. “It is nothing too complicated,” said Myolie. “Just one main idea – you’ve been pranked.”  Johnson quickly added, “This vacation was for old friends to relax. You know how Myolie is always very tense.” Asked if he believed that the prank went too far, he expressed, “I always tell Myolie that she should do whatever she wants as long as she is happy.” Myolie agreed, “Johnson is right. I should goof off once in a while.”

Myolie said she does not feel as if her fans were offended by the joke, but Johnson disagreed, “I’m sure out of a hundred fans, there would be at least one who got upset.”

When the press asked if Myolie was attempting to overtake the media exposure of former boyfriend Bosco Wong (黃宗澤), who is currently dating model Vanessa Yeung (楊崢), Myolie said, “Of course not! It has already been a long time [since the breakup].”

However, recent reports surfaced claiming that Johnson had indeed attempted to pursue Myolie for the past three months and even convinced their mutual friend Paisley Wu (胡蓓蔚) to help him out. Last month, Myolie boldly admitted that she had a pursuer, and even revealed that she received flowers on Valentine’s Day. The rumors claimed that the flowers were actually from Johnson. Reportedly, Myolie’s trip to South Korea was only with her close girlfriends, but Johnson insisted to tag along. Despite Johnson’s passionate pursuit for her affections, Myolie ultimately turned him down.

These rumors were quickly debunked by Myolie, who stated in a phone interview, “It is completely made up by the media. Johnson and I are just brothers.”