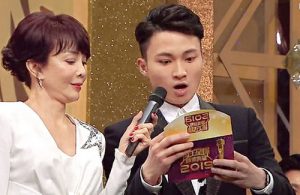 Only having made his debut four years ago, Kalok Chow (周嘉洛) made history when he won the Best Supporting Actor award at the 2019 TVB Anniversary Awards with his role as Gam Sing On in the TVB sitcom, Come Home Love: Lo and Behold <愛．回家之開心速遞>. The 24-year-old became the youngest and least experienced actor to win the accolade in TVB history. Though his win was unexpected, Kalok’s positive attitude and obedience played a major part in his victory.

In 2015, the young star joined the 28th TVB Artistes Training Course. Afterward, he participated in many dramas – mostly starring as a triad member. He played a gangster in three dramas – The Unholy Alliance <同盟>, Nothing Special Force <雜警奇兵>, and The Exorcist’s Meter <降魔> – in 2017.

It wasn’t until he was cast in Come Home Love that he won over viewers with his “lazy youth” character Gam Sing On. When he accepted his award, he expressed, “Even if Gam Sing On is a lazy youth, he still has value!” 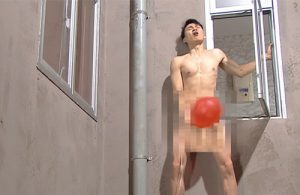 However, Kalok is anything but a lazy youth in real life. Not too long ago, the director asked him to go nude for a scene in the series. In that episode, Gam Sing On’s mom tricked him and locked him in the bathroom as he was about to shower. Then the toilet began overflowing and dirtied his clothes. While attempting to escape, he accidentally dropped his towel and exposed himself. The broadcasted episode pulled in a rating of 26 points.

A crewmember expressed, “He is really commendable. After he memorized the script, he took off everything except his underwear in front of everyone. He didn’t hesitate despite the cold weather, and the air conditioner was also blasting in the studio. But he was very brave, and he didn’t say no to whatever the director told him to do.”

In fact, Kalok has been repeatedly asked to reveal his fit figure in front of the camera. Still, the actor said it’s not a problem. “I don’t think the screenwriter is playing tricks on me. It’s just for the storyline and character,” he said. “The part with the overflowing toilet is more disgusting. Taking off clothes is a part of my job for me. I don’t mind it as long as it’s necessary for the plot, so I’m fine psychologically.”