Since recovering from COVID-19 recently, actress Aimee Chan (陳茵媺) has been experience post-COVID symptoms including dizziness, breathlessness and brain fog. Ever the doting husband, actor Moses Chan (陳豪) has been most thoughtful and would chauffeur her to and fro the filming set of Romeo and His Butterfly Love <羅密歐與祝英台>!

While Aimee contracted COVID-19 in December, hubby Moses took good care by sending her three daily meals. Resuming filming after her recovery, Aimee shared that she experienced long-COVID syndrome which made driving difficult. She praised Moses for sweetly fetching her to and from work, even on days when he did not have filming commitments.

Travel Plans as Family of Five
The actress’s comeback drama is expected to wrap in mid-January, but Aimee is already feeling emotional about leaving the set. “It’s like I just started my engine and will already halt soon,” The mother of three shared that she will prioritize parenthood and is open to future filming opportunities if the schedule allows her to still spend time with her children, but most importantly the script must be a good fit. As she has not headed overseas for three years, she also plans to travel as a family once the drama wraps. 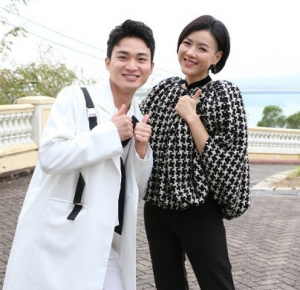 The couple’s sweet gestures were not lost on co-star Kalok Chow (周嘉洛), who says he “wants to learn to be a good man” from Ah Mo, who appeared on set on the last day of filming to join in the culmination of the filming, even though he had no scenes that day. Newly minted as “Most Popular Male Character” at this year’s TVB anniversary awards himself, Kalok described Moses as a class act whether in terms of “character, attitude or working etiquette”.