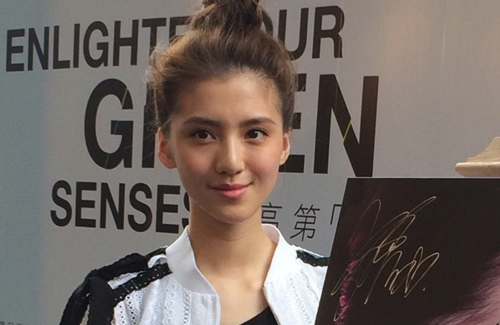 Karena Ng (吳千語) has complete trust in boyfriend Raymond Lam (林峯). Even though Raymond spends most of his days on the set with co-star Charmaine Sheh (佘詩曼), Karena has no doubt that Raymond is behaving himself and denies that jealousy prompted her film set visits.

Dating for nearly two years, Karena and Raymond shares a stable relationship despite numerous negative rumors. Even though the two spend much time apart due to their career obligations, they make good effort to fuel their love by meeting up as often as possible; Raymond has always returned to Hong Kong during filming breaks, and Karena was also spotted visiting him at his filming locations.

Currently shooting police thriller Line Walker <使徒行者>, Raymond reunites with good friend Charmaine and the two were allegedly flirty between takes. Since Charmaine is often playful with her male co-stars, the media reports that Karena has visited the set to personally keep an eye on her boyfriend.

Speaking about this rumor on April 28, Karena admits that she has visited the TVB set twice though she shares an amicable relationship with Line Walker’s cast and crew. “I know that filming is tough so I would always bring food. I would treat them to cupcakes and drinks and I always brought enough for everyone.”

Even though Raymond and Charmaine may share an on-screen kiss, Karena understands that intimate scenes are a normal part of an actor’s work. She also takes their gossips with a grain of salt, saying, “Ninety percent of rumors are completely made-up.We work in the same industry so I understand.”

Song Joong Ki to Host MAMAs for the Fourth Time