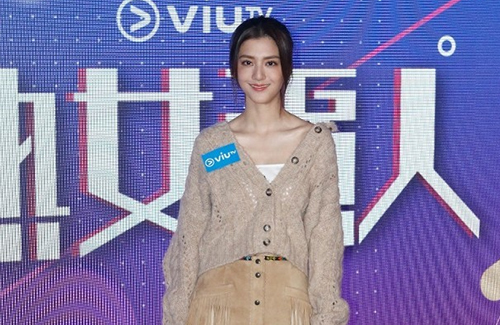 In the series, Karena Ng (吳千語) plays a bisexual woman who struggles to maintain her relationship with her boyfriend while she is attracted to another woman. The woman is played by Theresa Fu (傅穎).

“We do have kissing scenes,” said Karena when talking about her character’s relationship with Theresa. “Only a little bit. No bed scenes. It’s my first time kissing a girl on camera, and I didn’t feel anxious at all. Kissing men is actually more stressful.”

After completing the ViuTV series, Karena will be going to Xiamen to film a movie. Due to the COVID-19 crisis, Karena will have to fulfill a mandatory 14-day quarantine upon arriving in Xiamen. “I’m planning on spending my time watching dramas and exercising,” she said. Asking if she would have time to meet up with boyfriend Brian Sze (施伯雄), she said, “Haven’t seen him recently. (Someone saw you walking your dog with him.) Who? Just with a friend.”

Pointing out that there were rumors claiming that she and Brian were tying the knot soon, Karena said, “I’ll let everyone know if I get married.” Asking if she had anything to say about the rumors of her ex-boyfriend, Raymond Lam (林峯), expecting his first child with wife Carina Zhang (張馨月), Karena said, “No comment.”